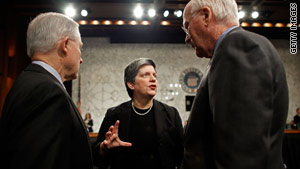 Washington (CNN) -- Five Transportation Security Administration employees have been placed on administrative leave after a sensitive airport security manual was posted on the Internet, the agency announced Wednesday.

The TSA said the version of the manual that ended up online was several editions old and did not expose the agency's current airport screening protocols. And Homeland Security Secretary Janet Napolitano told a Senate committee Wednesday that "The security of the traveling public has never been put at risk."

Napolitano told the Senate Judiciary Committee that action had been taken against a contractor and some TSA supervisors. The agency has instituted an internal review of the incident "to see what else needs to be done so that the incident never recurs," she said, and the Department of Homeland Security has asked its inspector general to conduct an independent review "to make sure that we are being rigorous and very disciplined on what is posted and what is not."

Sen. Jon Kyl, R-Arizona, suggested to Napolitano that a "red team" damage assessment be done -- a review by someone outside the agency to determine what advantage a potential enemy could have gained from the information and recommend what procedures or actions are necessary to minimize the damage. Napolitano said the agency is considering it.

"I think one of my first questions has been, well, what exactly was put out there that wasn't available either by observation of airport checkpoints or the like," she said. "But indeed, we may, if it is ascertained that there was some information not otherwise available that was put out, I think the red teaming issue is something that I would consider, absolutely."

Kyl replied that "just from public reports, there are clearly some things you don't want out there, spelling out the settings on the X-ray machines and explosive detectors, passenger and luggage screening details, pictures of credentials that are authorized, those kind of things. Clearly, somebody could take advantage of those things."

The 93-page instruction manual was written for airport screeners, providing details on how screening is conducted and the limitations of X-ray machines. It was posted on a Web site for government contractors, with sensitive parts redacted -- but the redacted information was not properly protected, and the information was restored by people familiar with the computer program.

The manual was dated May 2008, but the TSA said it was never implemented and has been revised six times, although it did not elaborate on the extent of the revisions. It said the report was removed as soon as it learned of the problem, but the full, unredacted version of the report appeared on at least one Web site Sunday and was distributed more widely Tuesday.

Two TSA officials told the Senate Homeland Security Committee that the practice of posting sensitive documents has been suspended for the time being. Rand Beers, under secretary for the National Protection and Programs Directorate at the Department of Homeland Security, and David Heyman, the agency's assistant secretary for policy, appeared before the committee and faced tough questions from its ranking Republican, Sen. Susan Collins of Maine.

Beers pointed out to Collins that the manual was for supervisors, not front-line screeners. "The actual screening procedures that a TSO, a transportation security officer, would actually use at a screening point are not in that document," he said.

Collins, however, noted that the manual has a whole section on credentials, including those used by members of the CIA, the U.S. Marshals and the Bureau of Alcohol, Tobacco, Firearms and Explosives.

"I would say to my colleagues that there's a page with a picture of what an ID for a U.S. senator looks like, and ironically, in the airport this weekend, I had the screener look at my ID and check the manual," Collins said.

"So this is important, if we're talking about making sure that the people who would do us harm don't have the ability to falsify documents, we've given them a textbook on how to do so in this manual because we've showed them exactly what documents look like for individuals who are likely to receive less screening because they have these documents, because they are law enforcement officials, for example."

She asked if the TSA had notified those agencies that such information was included in the manual. Heyman told her that such notifications had been made.

Collins told the committee that she did not believe she was revealing anything "that isn't already out." And Collins aide Jeannine Guttman said the senator believed Napolitano was trying to play down the seriousness of the breach and that her examples would drive home that point.