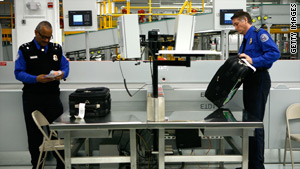 Washington (CNN) -- The Transportation Security Administration Tuesday said it is launching a "full review" of an incident in which the agency posted on the Internet a sensitive manual outlining screening procedures for law enforcement officers, diplomats, prisoners, federal air marshals and others.

In a statement Tuesday night, the TSA sought to minimize the impact of the unintentional release -- calling the document "outdated," "unclassified" and unimplemented -- while saying that it took the incident "very seriously," and "took swift action" when it was discovered.

Congressional critics, meanwhile, lambasted the agency and called for an independent investigation.

Sen. Susan Collins, R-Maine, the ranking member of the Senate Homeland Security Committee, called the release of the information "shocking" and reckless. "This manual provides a road map to those who would do us harm," she said.

At issue is a 93-page manual giving instruction to airport screeners on how to screen individuals. It also gives details on how screening is conducted and the limitations of X-ray machines.

The TSA posted the manual on a Federal Business Opportunities Web site that provides information for government contractors and redacted sensitive parts. But the redacted information was not properly protected, and the information was restored by people familiar with the computer program.

The TSA said the posted manual -- dated May 28, 2008, with an implementation date of June 30, 2008 -- was never implemented and has been revised six times, although it did not elaborate on the extent of the revisions.

"While the document does demonstrate the complexities of checkpoint security, it does not contain information related to the specifics of everyday checkpoint screening procedures," the TSA said Tuesday. "The traveling public should be assured that appropriate measures have been put in place to ensure the continued implementation of a strong security screening program," it said.

The TSA said it removed the report as soon as it learned of the problem. But it was too late. The full, un-redacted version of the report appeared on at least one Web site on Sunday, and was even more widely distributed on Tuesday.