On 'The Amazing Race' trail in Las Vegas 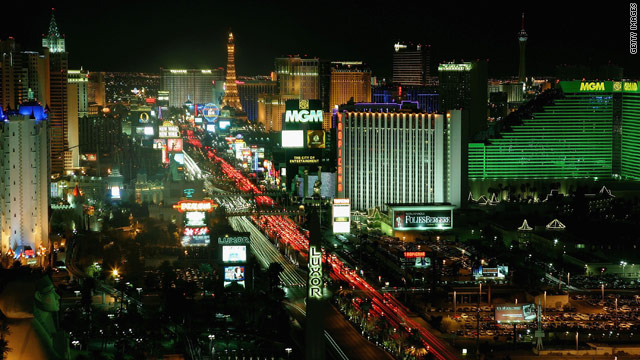 (CNN) -- There is something new to do in Sin City: Follow the trail of "The Amazing Race" finalists who sprinted through Las Vegas, Nevada, in a quest to win a $1 million grand prize.

After zipping through eight countries in 21 days, the contestants landed at McCarran International Airport and raced to the Graceland Wedding Chapel on the Las Vegas Strip to get their next clue.

The chapel offers "Elvis wedding packages," complete with Elvis Presley impersonators who walk the bride down the aisle and provide musical entertainment for the couple and guests, including performing "Viva Las Vegas" at the end of the ceremony.

Jon Bon Jovi was married there, as were Billy Ray Cyrus and Aaron Neville, the chapel's Web site boasts.

Next stop: Mandalay Bay, the popular resort and casino, where a contestant from each team had to rappel face first down the side of the gleaming 43-story building. Blog: Thrilling finale in Vegas

"That's the craziest thing I've ever done," said Cheyne Whitney, who ended up winning the race with girlfriend Meghan Rickey at the end of the finale, which aired Sunday on CBS.

The hotel offers a similar sight on a much smaller scale at its restaurant Aureole, where wine stewards attached to mechanical hoists fetch bottles from a four-story wine tower.

Teams then raced to the theater at the Mirage, where they got a taste of Cirque du Soleil's "The Beatles Love," and the Monte Carlo, where they had to count $1 million worth of poker chips.

Clues also led them to a high roller's suite at the MGM Grand and "Mr. Las Vegas" Wayne Newton, who announced the finish line for this season's race was his house: Casa de Shenandoah.

For those unfamiliar with "The Amazing Race," the hit reality television series takes a dozen two-member teams and sends them on a crazy, breakneck-pace journey around the world in search of clues that will lead them to the next stop in the competition. The first team to finish gets $1 million.

This season's race began in Los Angeles, California, and had contestants doing everything from playing volleyball in the mud in Estonia to guiding tourists across one of the world's busiest intersections in Tokyo, Japan, to herding ducks in Vietnam.

They zipped from country to country and continent to continent by plane, car, bus, ferry and ship.

"It was physically, mentally, emotionally the hardest thing that we've ever done but [also] life changing and rewarding. But it's good to be home," said Tiffany Michelle, who competed on the race with best friend and fellow professional poker player Maria Ho.

The two women dropped out of the race in the Netherlands, where they couldn't finish a game of strangely modified golf in the idyllic, but windy, countryside.

Perhaps the most memorable leg of the race took place in Dubai in the United Arab Emirates. Contestants first endured extreme heat when they had to find water in the stunning Dubai Desert Conservation Reserve, where visitors can take part in desert safaris and camel treks, then shivered as they entered the wintry, freezing landscape of Ski Dubai, the first indoor ski resort in the Middle East.

(No, it's not a mirage. You can ski and toboggan in the middle of the desert.)

Other stops included Cambodia, where teams had to find a hotel where Jacqueline Kennedy stayed during her visit in 1967, and Sweden, where the contestants had to plunge 24 stories in three seconds during a ride at an amusement park in Stockholm.