Take the long way back 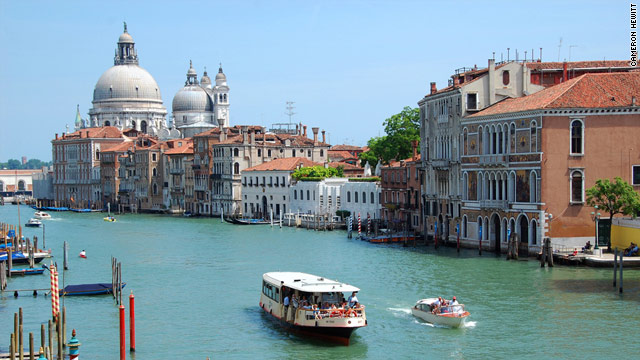 Taking a city's public, above-ground transportation -- such as Venice's vaporetti -- is a great way to see the sights.
STORY HIGHLIGHTS
RELATED TOPICS

(Tribune Media Services) -- Many savvy travelers tunnel their way through Europe's big cities by subway, popping up from below like gophers on a golf course. True, subways are a cheap and efficient way to get around. But by staying street level on public buses and trams, you get amazing views and the chance to really cozy up to a city. And it still gets you where you want to go, for cheap.

One of my favorite experiences in Paris is a ride on bus number 69. Running from the Eiffel Tower to Pere Lachaise Cemetery (the sleeping quarters of Jim Morrison), this bus takes you through some of the city's most interesting neighborhoods. Board at Champ de Mars Park, where dogs romp and soccer balls fly underneath the glow of Paris's 1,000-foot, reddish-brown hood ornament. From there bus drivers slice through the city's colorful streets, masterfully dodging delivery trucks and illegally parked cars.

A sightseer's dream, the route offers glimpses of Notre-Dame, Sainte-Chapelle, the Orsay and Pompidou museums, and Les Invalides, where Napoleon lies powerfully dead under a brilliant golden dome. As you roll by the Louvre, the Grand Gallery statues put on a stony toga fashion show. Near Invalides you may get a peek at boules (lawn bowling) -- though I enjoy watching the players' mannerisms more than the game itself. Cruising through the Marais district, you'll see classy stone mansions sitting alongside trendy bars -- jumbled, medieval Paris at its finest.

Berlin's bus number 100 is another fun ride, shimmying along West Berlin's shopping district, the 400-acre Tiergarten (nude sunbather central on hot days), the climbable Victory Column, Bellevue Palace (the president's residence), and the Spree riverfront. Though the bus keeps going, I prefer to leap out near the Reichstag, and explore East Berlin on foot.

Buses can get you to less-touristed areas. For instance, many visitors leave Madrid without seeing the modern "Manhattan" side of town. But a 30-minute ride on bus number 27 takes you from historic Madrid into the no-nonsense, skyscraper part of this city, past the American embassy, the Picasso Tower, the huge soccer stadium, and the Ministry of Defense. At the end of the line is the Puerta de Europa (Gate of Europe), twin office towers leaning into each other at 15-degree angles. You thought the Leaning Tower of Pisa looked off-kilter? That slants only five degrees.

Not only are buses cheap -- usually about 1 to 2 euros -- but also most let you hop on and off at will, provided you keep your trip under a certain time limit (usually 1-1/4 to 2 hours). You can be a bus zombie, or you can get off, explore, and catch the next one that rambles along; buses run frequently in big cities, making this an easy and fun way to lace together sightseeing destinations.

Trams (essentially buses on tracks) also snake through many European cities. In Prague, tram number 22 makes a fine orientation joyride, connecting the New Town with the castle. Circling the city core, Vienna's Ringstrasse is a 190-foot-wide boulevard built to replace its ingrown medieval wall. Two trams run along the Ringstrasse (you'll have to transfer once to make the full loop), allowing you to admire the architecture along the Ring -- a mishmash of design elements from the past, including Greek columns, Renaissance arches, and Baroque frills.

For vintage fun, London's Heritage Routes (number 9 and number 15) hit Piccadilly Circus, Trafalgar Square, and other hotspots in old-style double-decker buses. In Lisbon, 1920s trolleys shake and shiver through the old parts of town, somehow safely weaving within inches of parked cars, climbing steep hills, and offering sightseers breezy views of the city. Think of it as a Rice-A-Roni-style Lisbon joyride.

A few tips: Because many routes cater to tourists, buses and trams are prime targets for pickpockets. Be aware of the people around you, watch your belongings, and wear a money belt. Avoid public transportation during rush hour, when traffic crawls and seats fill up. Bus rides can be especially magical at twilight, when fountains and facades are floodlit.

But for atmosphere, no public transit system beats Venice's vaporetti -- motorized bus-boats. These work like city buses except that they never get a flat, the stops are docks, and if you get off in between, you may drown. Snag a front seat for the best views of the lavish palaces facing the Grand Canal. This is the only way to really appreciate the front doors of this historic chorus line of mansions. You'll also enjoy lovely views of churches, museums, markets, and couples kissing (or locals shivering -- it's quite breezy) atop the Rialto Bridge.

Staying above ground may not get you there fast. But remember, it's more about the journey than the destination. So hop aboard: A visual parade of wonders awaits.