Flying with the flu? Some may be tempted 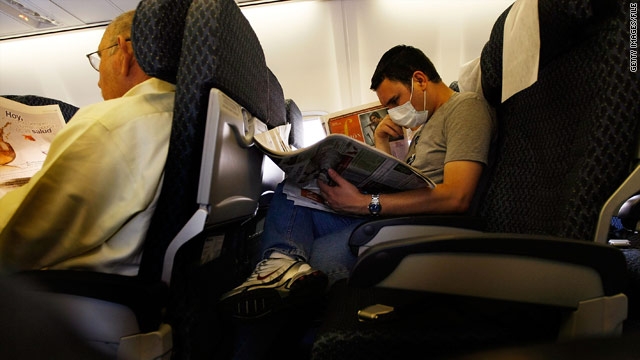 Some airline passengers have been trying to protect themselves from the flu by wearing masks.
STORY HIGHLIGHTS

(CNN) -- Air travelers bracing themselves for the annual Thanksgiving rush this week may have something else to fret about: passengers who could be bringing a little extra baggage of the viral kind on board.

Of all the places where H1N1 or other flu viruses may lurk, none seems as worrisome as the cramped cabin of an airplane, where hundreds of human beings share the same space and air.

"When people come together, germs can come together too," said Dr. Anne Schuchat, director of the CDC's National Center for Immunization and Respiratory Diseases.

"There are not that many studies about flu spreading on airplanes and trains, but anytime people are close together, there's a possibility of germs spreading."

So it may be unsettling to discover that 51 percent of respondents in a recent informal poll on TripAdvisor.com would fly while sick with the flu rather than pay a flight rebooking fee. About 2,300 people answered the online survey question.

Frequent fliers say the results are disturbing, but not surprising.

"I do think that's an unfortunate attitude, because the airplane is like a petri dish in the sky," said Rene Foss, a flight attendant for 25 years and the spokeswoman for the Association of Flight Attendants.

"[But] people really are resistant to paying any extra fees."

Watch what germs you can face on a plane

Every holiday travel rush is crazy on its own. But this one comes during the outbreak of the swine flu and in the midst of a recession that has many people watching every penny.

It's a perfect storm that forces air travelers to make frustrating decisions.

Take the story of a Texas couple recently featured in the Airline Biz blog of The Dallas Morning News.

Their 6-year-old daughter became sick with the swine flu two days before the family was to fly on American Airlines. When the girl's father contacted the airline to cancel and rebook the tickets, which had cost $189 each, he was told he would have to pay a cancellation fee -- at $150 per ticket.

"Of course I objected, asking for a medical waiver. Our pediatrician even offered to provide a note as proof of the swine flu. They refused," wrote the man, whose name was withheld by the blog.

"I suggested with this policy that they are almost forcing people to fly when they have the swine flu, therefore subjecting others to the flu."

How much, if anything, you would have to pay to reschedule a nonrefundable ticket depends on the carrier.

American Airlines says that if someone chooses not to travel because of an illness or another reason, the value of their ticket is governed by the applicable fare rules, which may include a change fee. In those cases, the value of the ticket can be used for future travel, minus the fee. It's one of the risks people take when purchasing lower-fare tickets, said Tim Smith, a spokesman for the airline.

Delta works with passengers who are too ill to travel on a case-by-case basis, but if they provide a doctor's note, the airline will reschedule the flight without fees, said spokeswoman Susan Elliott. AirTran Airways and United have similar policies.

Airlines urged to be lenient

The prospect of people sneaking on board with H1N1 to avoid paying a fee has some physicians urging a lenient policy for ill passengers who want to change their travel plans.

"It is clear people should not fly when they're infected, but they should also not be penalized for being responsible citizens," said Dr. Stephanie Haridopolos, a family practitioner in Melbourne, Florida.

Haridopolos, whose 3-year-old daughter recently had the swine flu, believes all airlines should temporarily waive cancellation fees for H1N1-infected passengers who have a doctor's note.

"The current policies force people to choose their pocketbook versus their health," she said.

How do you know when you're too sick to fly?

The Centers for Disease Control and Prevention urges people who have a fever and cough to avoid traveling until 24 hours after their fever has broken, Schuchat said. You can find other symptoms to watch out for and more travel advice on flu.gov.

If flu-stricken air travelers do try to fly, they may find other passengers on edge and eyeing each other suspiciously.

Foss, the veteran flight attendant, said she's seeing more people using face masks and hand sanitizer. When she recently flew as a passenger, the woman next to her took out a scarf and wrapped it around her nose and mouth after a man in the row behind them began coughing.

"She kind of created her own protective device," Foss recalled. "I'm a bit of a hypochondriac myself, and it started to make me nervous, and I found myself lifting my turtleneck over my nose."

Passengers have complained to Foss about other people seemingly ill in the cabin. In fact, the CDC's Schuchat recommends that if someone is coughing excessively, you should ask a flight attendant whether they could be moved to a less crowded part of the plane.

Flight attendants are trained to look for signs of trouble such as labored breathing and excessive coughing or sneezing, Foss said. If a passenger appears to be too ill too travel, they can bring that person to the attention of the captain before takeoff. Gate agents can also stop passengers from boarding.

But people can be sick and still look fine, Foss said, and some may not even know they're ill.

To keep germs at bay, the basic advice still applies: Wash your hands frequently, and avoid touching your eyes and nose. And if you're sick, don't fly.