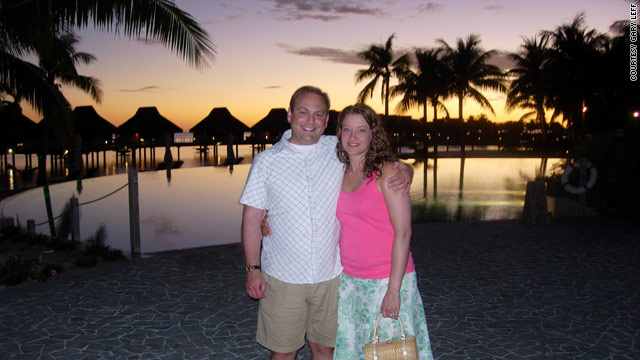 Gary Leff and his wife, Shanna Follansbee, spent 670,000 airline and hotel points when they got married.
STORY HIGHLIGHTS

(CNN) -- It can take years to snag a reservation at El Bulli, a restaurant in Spain that's been called the best in the world, so when Gary Leff got the word that he'd finally gotten in, he whisked his wife across the Atlantic -- just for dinner.

He estimates that he's accumulated 7 million frequent-flier miles across different programs over his lifetime, thanks to his love of travel, lots of airline-affiliated credit card purchases and careful monitoring of mile promotions.

"It's nice to be able to know that I can get on virtually any airplane in the world without worrying about the money," said Leff, 35, the chief financial officer for a university research center, who lives in Arlington, Virginia.

"The world is so much smaller, and that's incredibly liberating."

Hollywood is taking interest in multimillion-milers like Leff with the upcoming movie "Up in the Air," which stars George Clooney as an extreme frequent flier on the cusp of reaching 10 million miles.

For those lucky or busy enough to receive airline statements with lots of zeros, it's a world of first-class upgrades, airport lounge attendants who know their names and access to luxury unimaginable for most air travelers.

Gene Gibbs still remembers the champagne, caviar and multicourse meals he feasted on when he and his partner spent 360,000 miles for two first-class tickets from New York to Dubai on Emirates, the airline of the United Arab Emirates.

"It was amazing, incredible," Gibbs, 40, said. "They had private suites with doors that slide closed, unparalleled privacy."

Gibbs, a pension consulting actuary in San Francisco, California, estimates that he and his partner have earned 10 million frequent-flier miles in the past five years, mostly through extensive leisure travel that has them jetting off every weekend. They burn more than a million miles a year, Gibbs said.

"The ultimate goal is to spend them all in business or first class on the best carriers you can find in the world," he added.

Gibbs is planning a trip to Athens, Greece, in November and a flight to Singapore in December, all on frequent-flier miles.

Such award tickets may be hard to imagine for people who feel like it takes an eternity just to accumulate enough miles for a free coach seat, but mileage millionaires aren't as rare as you might think.

It pains me when I see the big dip in my balance after cashing in several hundred thousand miles.
--Gary Leff
RELATED TOPICS

Airlines are tight-lipped about the exact number, but it's estimated that more than 300,000 people have earned at least 1 million miles in a single frequent-flier program, said Randy Petersen, editor and publisher of Inside Flyer magazine.

Airlines woo mileage millionaires carefully and are protective of their identities and demographics so as not to lose their best customers to their competitors.

For Charles Witt, the biggest perk of having accumulated millions of miles is being taken care of while globetrotting, he said. He also likes being able to splurge on travel for himself and his friends.

Witt, 41, who is a U.S. government employee in Washington and travels all over the world on business, gave himself a trip on the Concorde as a birthday present in 1994. He spent 240,000 miles for a special promotion that let him fly first class on a regular plane from Washington to London and return on the supersonic jet.

This Christmas, he's planning a first-class trip with his girlfriend to Taipei, Taiwan, purchased with his miles. They'll spend New Year's in Tokyo, Japan.

"It's one of those nice things that you can do for special trips with the people you really like spending time with and you can do it in a special way," Witt said.

It's a feeling shared by some of the other million milers.

Leff, the frequent flier who hopped across the pond to Spain with his wife in business class at a cost of 100,000 miles per ticket just to have dinner at El Bulli, took advantage of his account in a really big way when he got married four years ago in Seattle, Washington.

He spent a grand total of 670,000 points, which helped pay for hotel rooms for out-of-town guests and for his honeymoon in Bora Bora and Australia.

Like most frequent fliers, Leff knows that unused miles can easily lose value, so he likes to spend them despite feeling a bit disappointed when his next statement arrives.

"It pains me when I see the big dip in my balance after cashing in several hundred thousand miles," Leff said. "At the same time, that does not ever convince me not to spend the points, because they'll never be worth more tomorrow than they're worth today."

Next on his itinerary: Thanksgiving in Paris, France, and New Year's in the Caribbean. It's good to be a mileage millionaire.