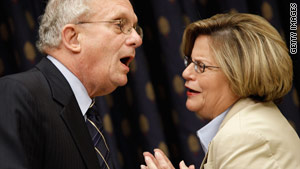 Washington (CNN) -- The U.S. government has no right to restrict American tourists from traveling to Cuba, the chairman of the House Foreign Affairs Committee said Thursday.

"It is the only country in the world where our people are not allowed to go," said Rep. Howard Berman, D-California, at the start of a hearing on whether it is time to lift the travel ban.

The hearing was not called to address the issue of the U.S. economic embargo against the island nation, which Berman said was a topic for another day.

Berman and Sen. Richard Lugar, R-Indiana, co-authored an op-ed supporting unrestricted freedom to travel to Cuba that appeared Thursday in The Miami Herald. Lugar is ranking Republican on the Senate Foreign Affairs Committee.

"This ban has prevented contact between Cubans and ordinary Americans, who serve as ambassadors for the democratic values we hold dear," the op-ed says.

"Such contact would help break Havana's chokehold on information about the outside world. And it would contribute to improving the image of the United States, particularly in Latin America, where the U.S. embargo on Cuba remains a centerpiece of anti-Washington grievances."

"While opponents argue that repealing the travel ban would indicate approval of the Cuban human rights record, many human rights organizations -- among them Freedom House and Human Rights Watch -- have called for abolishing travel restrictions," the op-ed says.

At Thursday's hearing, Rep. Ileana Ros-Lehtinen of Florida, the ranking Republican on the committee, argued against lifting the ban, which, she stressed, is not total.

There are 18 ways for Americans to travel legally to Cuba, including trips for athletic competitions, religious reasons and congressional research, she said. Over the years, there has been an onslaught of European and Canadian visitors to Cuba, she said.

"What has the Cuban regime done? Has it unclenched its fist? Did I miss that?"

The majority of European tourists have been going to Cuba for rum, for music, for sex, for cigars, for sun, for years," Ros-Lehtinen added. "Have they brought about any change in government practices?"

She suggested that if Americans want sun, they should vacation in Florida.

Berman and Lugar said they understood the concern that American tourists would put money in the hands of the Castros. Raul Castro became president after his brother Fidel became too ill to run the country.

"But the reality is that a significant portion of these funds would also aid the underground economy and the small self-employed sector, strengthening an important foundation of independence from Cuba's authoritarian regime," the lawmakers said in their op-ed piece.

"At the end of the day, the importance of depriving the Castro regime of some additional financial resources is far outweighed by our interest in accelerating the spread of democratic ideas."