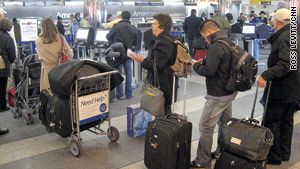 Atlanta, Georgia (CNN) -- The failed computer system that caused flight delays across the country has been restored, the Federal Aviation Administration said Thursday.

FAA spokesman Paul Takemoto said the system went out at 5:06 a.m. ET and came back on about five hours later. He said officials working to pinpoint the cause know that there was a problem with the main telecommunications systems.

Due to the outage, air traffic controllers had to enter flight plans manually, a problem that causes delays, according to the FAA and the National Air Traffic Controllers Association.

The air traffic controllers' group said the problem will cause flight delays throughout the day because of a "domino effect."

"Air traffic controllers are without electronic decision-making tools and cannot keep up with the sheer numbers of flights -- resulting in delays," the controllers' group said in a statement during the outage.

"Air traffic controllers on the ground at major airports are getting no automated flight plan information and have to enter that information manually, a cumbersome and time-consuming process."

Carmen McDonald was among those passengers inconvenienced by flight delays when the computerized system that airlines use to file flight plans failed for several hours Thursday in Atlanta, Georgia, and Salt Lake City, Utah.

McDonald said she thought her Spirit Airlines flight would leave on time around 7 a.m. ET from Fort Lauderdale, Florida. But the 39-year-old model sat for an hour and 15 minutes amid the noise of loud kids before the plane was ready to leave a logjammed runway and take off to Boston, Massachusetts.

"I'm frustrated," she said, distracted by using Twitter and calling on her cell phone as her plane sat planted on the runway. "I have somewhere to be."

AirTran Airways spokesman Christopher White said the airline had canceled 22 flights around the country as of 8 a.m. ET and had delayed dozens more because of the flight plan filing system problem.

He said most of the canceled flights were in Atlanta, AirTran's hub of operations, and others are spread throughout the country. White said the problem will have "a pretty major impact on operations" and the cancellations will have a ripple effect.

AirTran, which operates about 700 flights a day, asked customers to check airtran.com before showing up at the airport.

Delta Air Lines spokeswoman Susan Elliott said the airline was not providing numbers on how many flights were affected. But she said that Delta will give travelers some flexibility in rescheduling.

American Airlines spokesman Tim Smith said that 300 to 500 flights had been delayed, virtually every one scheduled for takeoff. The longest delays have been a little more than an hour, but no flights have been canceled, and some might be consolidated, he said.

"Things are moving; they are just moving more slowly," Smith said, adding that American has been affected at LaGuardia and John F. Kennedy International airports in New York as well as in Dallas/Fort Worth, Texas, and Chicago, Illinois.

Smith said the problem reflects that the U.S. air traffic control system operates with what he calls "1960s technology" and needs to be modernized.

US Airways spokesman Morgan Durrant said the airline had a few delays across the system, including some as long as 30 minutes but it doesn't anticipate any more.

"The airport is working to minimize the impact on customers by bringing in additional staff and ensuring that all facilities are operational and fully maintained. All passengers are encouraged to contact the airlines regarding the statuses of their flights before they head to the airport," the airport said.

At Indianapolis International Airport, most morning flights left on time with little impact from the computer glitch, but inbound flights from large hubs are expected to be delayed Thursday and possibly into Friday, said spokeswoman Susan Sullivan.

The airport asked concessionaires to beef up staffing levels and has added employees to keep the facility clean and the passengers comfortable.

The system -- the National Airspace Data Interchange Network, or NADIN -- appears to be the same one that failed in August 2008. The FAA said the information in the network is data required to launch planes expeditiously. Airplane safety was not affected, the FAA said, adding that planes in the air had radar coverage and communication.

Weather also might have played a role in Northeast flight delays. The air traffic controllers said "weather equipment was affected" and information such as winds speeds was not "processing."

The controllers said that "airport efficiency is being cut at least [in] half at places like New York-JFK" and that in the "New York airspace, controllers are forced to put 20 miles of space between aircraft."