6 tips for getting your way when you travel 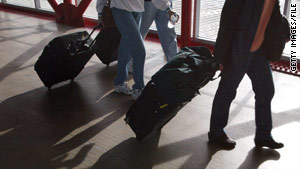 Be nice. Remain calm and rationally request what you would like.
STORY HIGHLIGHTS
RELATED TOPICS

(Tribune Media Services) -- The thought of spending 11 hours in a locked and upright position didn't put Elyse Weiner in a good mood. But you wouldn't have known it.

Being nice to airline agents may yield better results than getting frustrated.

"I was leaving Venice for New York and found that my airline seat was broken," recalls Weiner, who runs a Manhattan-based podcasting company. "I explained my problem to the flight attendant, but he became angrier and angrier, yelling that 'nowhere in your agreement with our airline does it say you get to have a seat that works.' "

As the crewmember grew more agitated, Weiner had the opposite reaction: She turned nice.

"I stayed calm and smiled," she remembers. She also offered to pay for a better seat by redeeming frequent flier miles.

It worked. After the confrontation, another flight attendant quietly moved her to business class. No extra charge.

At a time when pleasantness and politeness seem to be in such short supply in the travel business, being nice can take you a long way.

I should know. A few weeks ago, I arrived at Chicago's O'Hare airport a little early and vaulted to the top of the standby list on a flight to Orlando by being extra polite to the gate agent and cracking a joke. I still can't believe it.

That got me thinking: Is politeness a new form of currency in the travel world? Could a smile or an act of kindness be more effective in getting preferential treatment than elite-level status or the amount of money you paid for your airline ticket, rental car or hotel room?

I can almost hear some of the elite travelers out there snorting with disdain. No, you're probably saying to yourselves, we deserve to be treated better than the tourists, no matter how we behave. But the rest of you know I'm on to something.

Question is, how do you get what you want by being nice? I asked travelers and the folks behind the counter to share their tips. Here's what they told me:

When a flight is delayed or a hotel loses your reservation, no one can blame you for losing your cool. But don't, say people in the know. Try going the other way. Don Schmincke, a writer and professional speaker, recalls an overseas flight on which he and his partner received seat assignments that weren't together, making it impossible to get any work done. "Typical response: start yelling," he says. His response? Calmly and politely express concern to the gate agent. "She said 'just get your boarding pass and I'll meet you at the gate,'" he remembers. "She showed up at the gate with two side-by-side seats -- in first class." Somehow, I think a scolding wouldn't have gotten him the same seats.

It's there. Sometimes you have to look for it. Jennifer Walsh finds that a favorable comment about a ticket agent's outfit or jewelry will, at the very least, elicit a smile and a "thank you." And that's a good start. Just last week she was trying to get a seat on an early flight from New York to Florida, which was jam-packed with passengers. A gate agent held the power over her plans. "I complimented her on her outfit and asked her how her week was," she says. (A kind word about your appearance means a lot coming from Walsh: She's a nationally known beauty consultant.) Needless to say, she made the flight.

Problem customers are plentiful. Sometimes, all you have to do is point out that you aren't one of those people to get your way. For example, when Dan Lovejoy checked into an upscale hotel in Boston that was being renovated, he overheard another guest making a series of requests, "not rudely, but pretty demanding," he says. She was given the key to a room in the older part of the hotel. "When the clerk asked me my preferences, I said, 'I'm traveling alone for a conference. I don't have any special needs -- just put me wherever,' " he recalls. "When she handed me my key, she said, 'I've put you in a newly renovated room. We like to be nice to people who aren't difficult.'"

Think about the employees. When you're likely to need a favor (like, when a flight is canceled or a hotel is overbooked) imagine what a terrible day they're having. How about letting them know that you feel for them? Lynne Lambert, who owns an apparel business in Chappaqua, N.Y., remembers a recent canceled flight where "every passenger was trying to rebook a different flight." She approached a ticket agent, and instead of making demands, she started the conversation with, "You must be having a rough day." (Note: it's important not to sound patronizing when you do this. Either be genuine or don't say anything.) It worked for Lambert. "I got on the standby list and flew out on the last flight of the night," she remembers.

It will get you everywhere. Well, almost everywhere. Employees respond well to "attaboys" because at some travel companies, praise is dished out sparingly. Author Barry Maher says he goes out of his way to tell a ticket agent or hotel worker when they're doing good work. "I'll say something like 'Wow, I can't believe what a great job you're doing handling this. You're really exceptional at what you do,' " he says. "Guess who's most likely to get the next available seat, fairly frequently in first class?"

Being nice to other travelers can get you ahead. In researching this story, I found plenty of examples of passengers who agreed to move to accommodate other travelers who wanted to sit together, or yielded to someone with a disability who needed their seat, and that often led to preferential treatment by the crew, which noted the sacrifice. "The passenger who is willing to wait for the next flight and give up their seat is more likely to get the business class seat on the next flight," says Natalie Hjelsvold, a flight attendant for a Canadian airline. "They are given a future travel credit along with a seat that would have cost them hundreds of dollars more -- just for being nice."

Ready to go out there and charm the socks off the travel industry?

You'd think that rude behavior would get you absolutely nowhere when you travel, but that wouldn't be entirely accurate, either.

That's a topic for next week's column.