(CNN) -- Police met a wayward jet that overshot the runway by 150 miles -- while not responding to control tower communications -- and said the pilots were "cooperative, apologetic and appreciative." 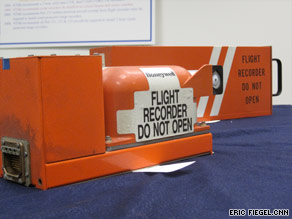 Authorities are reviewing the plane's cockpit voice recorder as well as its flight data recorder.

The Minneapolis-St. Paul [Minnesota] Airport Police report on the incident, released Friday, said officers asked flight attendants to keep passengers in their seats while they checked out the cockpit, where, they said, "the door was standing open."

The police report identified the pilot as Timothy B. Cheney and the first officer as Richard I. Cole.

The Airbus A320 was carrying 147 passengers and an unknown number of crew members, according to the National Transportation Safety Board.

Air traffic controllers re-established radio contact after the plane had flown about 150 miles past its destination.

However, approached outside his home Friday, the first officer told CNN affiliate KGW that "nobody was asleep in the cockpit and no arguments took place." Cole was referring to NTSB's earlier statement that said, "The crew stated they were in a heated discussion over airline policy and they lost situational awareness."

"There's a lot of misinterpretation going on," Cole said, though he refused to comment further.

But a former accident investigator told CNN the voice recorder may still provide valuable information, because the pilots could have discussed the earlier events on the way back to Minneapolis.

The separate flight data recorder also could prove valuable because it would have recorded actions taken by the pilots during the 78 minutes they did not respond to repeated calls from air traffic controllers, the former accident investigator said.

The safety board said Friday afternoon that experts were reviewing the solid-state voice recorder. It said only that the recorder "captured a portion of the flight that is being analyzed," and added there would be no further comment.

Meanwhile, the North American Aerospace Defense Command, which scrambled fighter jets for the wayward plane did not launch them, said it was reviewing procedures for launching the fighters to track potentially hijacked or suspicious aircraft.

At issue, according to a senior U.S. official directly familiar with the timeline of the incident, is the FAA's apparent delay in notifying NORAD that the Northwest jet was not in contact with controllers.

The official, who declined to be identified because both the military and the FAA are reviewing the entire incident, said that the FAA's request for military involvement came after the plane passed the Minneapolis airport. NORAD scrambled fighter jets at two locations. But as they approached the runway for takeoff, the FAA reported being back in contact with the Northwest flight, and the fighters stayed on the ground.

"My real question is why we did not know of the 'radio out' situation from the FAA sooner," the officials said. "The FAA is also looking into that," the official told CNN.

Since the September 11, 2001, terror attacks, NORAD has regularly launched fighter jets to track aircraft in unusual situations such as when they deviate from flight plans, lose radio contact or enter restricted airspace.

Reported instances of two pilots falling asleep are rare. In August, the safety board concluded its investigation into a February 13, 2008, incident in which two pilots aboard a Go airlines flight fell asleep and traveled 26 miles beyond the destination of Hilo, Hawaii, before waking and contacting air traffic controllers.

Northwest Airlines is part of Delta Air Lines, which issued a statement Thursday, saying it is "cooperating with the FAA and NTSB in their investigation, as well as conducting our own internal investigation. The pilots have been relieved from active flying pending the completion of these investigations."

It said Flight 188 landed safely in Minneapolis just after 9 p.m.

Delta suffered another major embarrassment this week when a Delta pilot landed a passenger jet on a taxiway at Atlanta-Hartsfield International Airport instead of the runway. The NTSB is investigating that case as well.