WASHINGTON (CNN) -- The Federal Aviation Administration on Wednesday proposed fines against two of the nation's largest airlines, saying the airlines flew planes on hundreds of occasions in violation of FAA or airline safety standards. 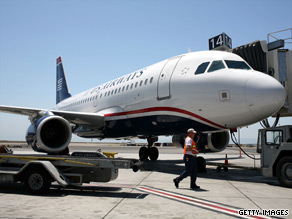 US Airways says the problems are in the past. United notes it self-reported its problem.

Both airlines issued statements Wednesday assuring the public of their commitment to safety. US Airways blamed its problems on the difficulties of merging US Airways and America West maintenance operations in 2007. United, meanwhile, said it self-reported the incident leading to its proposed fine and has since taken steps to ensure that safety standards are met.

The US Airways case involved the greatest number of planes -- eight. The FAA alleges US Airways operated the eight aircraft on a total of 1,647 flights last fall and winter while the planes were in a potentially unsafe condition.

Three of the planes were flown while not in compliance with FAA rules known as Airworthiness Directives, or ADs. The FAA issues ADs when it discovers a potentially unsafe condition on a type of aircraft, and it wants airlines to inspect their fleets or conduct preventive maintenance.

The FAA said it issued an AD requiring airlines to inspect Airbus A320 aircraft for possible cracking of a landing gear part. But US Airways operated two Airbus A320s on a total of 43 flights without complying with the ordered inspection. The airline also operated an Embraer 190 aircraft on 19 flights without performing an inspection to prevent a cargo door from opening during flight, according to the FAA.

The remaining five cases involve the airline's failure to follow its own maintenance procedures, the FAA said.

In a letter to its employees, US Airways Chief Operating Officer Robert Isom called the FAA announcement disappointing.

"It is important to remember that today's announcement references situations that are in the past, and in several cases, date back to two years ago," he wrote. "Our team has worked cooperatively with the FAA to investigate and correct any discrepancies to the FAA's satisfaction."

The United Airlines case involves one aircraft, a Boeing 737. According to the FAA and the airline, a pilot noticed a low fuel pressure indication while on a flight from Denver, Colorado, on April 28, 2008. The pilot shut down an engine and returned to the Denver airport. United mechanics who inspected the engine found that two shop towels had been used to cover openings in the oil sump area, instead of protective caps.

The FAA said the aircraft had flown more than 200 times in the unsafe condition before the problem was discovered.

A United spokeswoman said the airline reported the incident to the FAA and has taken several measures to prevent a recurrence, including additional training of maintenance workers.

Both airlines have 30 days to respond to the FAA's proposal for fines.

In March, Southwest Airlines agreed to pay $7.5 million to settle a complaint that it flew unsafe planes.