The lowdown on airline food

(Travel + Leisure) -- If you were a TWA first-class passenger traveling from Washington, D.C., to San Francisco, California, in October 1970, your menu read more like a feast for the Sun King than a precooked meal heated in a convection oven. 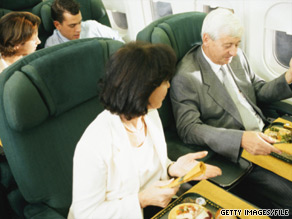 You might have started out with crêpe farcie aux fruits de mer, with lobster, shrimp, crabmeat, and scallops in a sauce of cream, butter, and sherry, followed by veal Orloff "studded with truffles." After that, there were cheeses, Grand Marnier gâteau, fruits laced with kirsch, and after-dinner cocktails. TWA hoped the experience would be so memorable it even provided a special envelope for you to mail your menu to the folks back home.

Yes, those were the days. Passengers often adjourned to separate dining rooms, tables were set with crisp linens, and we could be trusted with cutlery. Cuisine remained a signature airline amenity, and was not yet the domain of (literal) bean counters. (Never mind that an economy-class ticket in 1970 cost about $300 round-trip, or $1,650 adjusted for inflation.)

In 1978 that all changed. De-regulation hit and the Civil Aeronautics Board ceded control over setting airfares. For the first time, airlines had to compete for passengers with lower prices and loyalty programs. Competition trimmed profit margins, putting a squeeze on carriers that continued unabated until the terrorist attacks of 2001 turned trouble into crisis.

Suffering from heavy financial losses and scrambling for further cuts, airlines began targeting food. Shortly after 9/11, American Airlines and TWA stopped serving meals in their main cabins on domestic flights, followed by nearly every other U.S. carrier. According to the logic, it was a flight's schedule and price that sold tickets -- not its food.

Today, among the five so-called U.S. legacy carriers, only Continental still serves complimentary in-flight meals on domestic routes, an anachronism the airline has built an entire advertising campaign around.

But there's a new dynamic in the skies today. As passengers demand more for their money (especially in this economy), the race is on to capture the elusive paying customer in first and business class by stepping things up in the front of the plane.

Lauri Curtis, vice president of onboard services at American Airlines, says of domestic flights, "We're using the few dollars that we have to invest in the premium cabin. In the main cabin, we look at convenience."

In fact, although struggling U.S. carriers cut their spending on food from $5.92 in 1992 to $3.39 per passenger (across all cabins) in 2006, according to the Bureau of Transportation Statistics, they're shifting priorities again. The legacy carriers actually increased spending on food by four percent from 2007 to 2008 -- even as they were struggling to cut costs in the face of rising fuel prices.

To appeal to increasingly discerning palates, more and more domestic airlines are taking cues from international carriers, which have famously enlisted the help of boldface names to plan meals.

That's not to suggest that Trotter's in the galley making your risotto. These celebrity chefs collaborate with companies like Gate Gourmet -- whose kitchens crank out the food for 200 million passengers a year across most of the world's major airlines -- to translate their visions into something that works at 30,000 feet. That's no small feat, considering that the food will travel through a blast chiller and assembly lines, across a tarmac, and into at least two ovens before it gets to your seat.

Meanwhile, space considerations in the onboard ovens and on the tray tables pose another problem. (Pyles's famous Cowboy bone-in rib eye, for instance, had to be adjusted down to a fillet.)

Add to these technical difficulties the fact that by some estimations, says Bob Rosar, executive chef of Gate Gourmet North America, "you could lose 18 percent of your flavor profile, or sense of taste, in a pressurized cabin." But after decades of food science and trial and error, he says, compensating for the loss no longer means adding 18 percent more salt and pepper to meals. "We're using herbs and flavored vinegars to build the flavors at every level. Instead of baking your chicken, we'll sear it or grill it."

Of course, few U.S. carriers can provide meals on the same scale as international airlines, which haven't faced comparable financial difficulties. Some carriers, such as Austrian Airlines and Gulf Air, actually place chefs on board to prepare meals in the premium classes, and many airlines, including Austrian and Singapore, train flight attendants as sommeliers.

Even as domestic airlines reinvent menus for front-of-the-plane passengers, those in the back are witnessing the advent of creative buy-on-board menus. What started with the sale of basic snack boxes has ballooned into a virtual arms race among airlines to provide fresh, healthy sandwiches and salads to domestic passengers. United recently added items such as a turkey and asparagus wrap and an Asian chicken salad, $9 each, and American's new partnership with Boston Market includes a Chicken Carver and an Italian chopped salad, among others (all items are $10), on select routes.

Chef Todd English, meanwhile, has developed a menu of dishes such as a goat cheese and vegetable salad ($8) for Delta's main cabin. JetBlue, which famously gives out free snacks, has even been investigating the possibility of selling food on its flights; it tested a buy-on-board program earlier this year.

According to airlines' studies, passengers are actually happier paying for something they want to eat rather than getting free food they don't. Virgin America points to research that revealed that economy passengers are willing to spend up to $21 on onboard services (including food and entertainment), but that the food needs to be fresh and cocktails high quality.

Though airlines insist their buy-on-board programs are primarily intended to offer passengers a better in-flight experience, they are also part of a larger effort to build up non-airfare revenue. (Of U.S.-based carriers, only Virgin America would discuss the base cost of its snack boxes-about half the $6 purchase price -- and confirm the profitability of its food program.)

But reaching a balance isn't easy; some airlines are finding out the hard way when they've taken à la carte too far. Last year, United dropped plans to test buy-on-board on transatlantic flights only weeks after announcing the program, because of passenger protests. And US Airways had to reverse its policy of charging for soft drinks and bottled water on domestic flights after only seven months.

For all their teams of accountants and high-powered consultants, reams of research, and celebrity chefs, the airlines say their ultimate goal is to find that sweet spot where passengers in premium enjoy the service enough to pay extra, passengers in coach feel satisfied (and maybe even happy) with their experience, and carriers can stay solvent. If they get it right? Here's hoping domestic airline food will one day again be good enough to write home about.

All About Air Travel • Food and Cooking