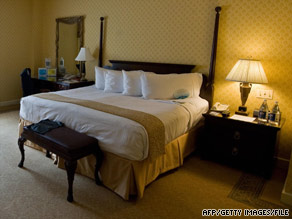 Don't assume any hotel service is free, and always ask if there will be a charge, Christopher Elliott says.

The first Dave Howell lives in England, where he works as a manager for an export company. But when he checked into the Denver Marriott City Center in Colorado, he found that the hotel had confused him with another guest that happened to share his name.

First, he was issued the keys to a room on the executive floor that was already occupied, presumably by the other Howell. He was reassigned to another room, eventually. When he checked out, he was surprised to discover someone else would cover his stay. "The bill was made out to a David Howell from New York and was to be charged to his American Express card," he recalls.

Billing snafus like Howell's have been happening since there have been hotels, of course. A vast majority of inaccurate bills, also called folios in hotel-speak, are innocent mistakes -- a wrong room number, sloppy handwriting or a computer glitch. But some aren't. Who can forget the 1985 comedy "Fletch" in which Chevy Chase tells his server to "Put it on Underhill's" bill?

The difference is that in this awful economy, hotels are far more reluctant to fix the mistake unless they can find the guilty party.

"Where hotels generally used to remove an erroneous charge without question, now they are more careful," says Henry Harteveldt, a travel analyst at Forrester Research.

Howell -- that would be the English one, in case you've lost track -- eventually called a manager and straightened out his billing mess, "although they still gave the impression that it had all been my fault," he adds.

But there are easier ways of ensuring your hotel folio belongs to you.

When I checked out of The Shores Resort & Spa in Daytona Beach, Florida, recently, I found a "Fletch"-like surprise on my bill: Someone had ordered a cheeseburger, Caesar salad and two Miller Lites at the Tiki Bar and charged it to my room. There's just one problem: I've never been to the Tiki Bar. Besides, I'm more or less a vegetarian and I'm not much of a drinker. The charges couldn't have been mine.

I asked them to be removed on the morning I checked out, and they were. It helped that I had a good alibi: I wasn't physically present at the hotel when the food was ordered. And I could prove it.

Accepting a minibar key, even if you don't intend to use it, can lead to billing problems later on, according to experts like Harteveldt. "When I'm offered a minibar key, I decline it, and ask the front desk agent who is checking me in to note in my record that I have declined the key," he says.

Otherwise, you'll be held responsible for items that are removed. (Worse, some minibars register a "sale" any time an item is moved, meaning that if you touch it, you buy it.)

It seems like a simple thing, but a lot of hotel guests forget to do it. I do. I just picked up a deep-dish pizza from the restaurant at the River Hotel in Chicago, Illinois, where I'm staying for the weekend, and I foolishly tossed the receipt. So maybe I ought to heed my own advice.

Actually, it's Syl Tang's advice. He's the editor of the travel site Hipguide. "When I'm out during the hotel stay, I keep receipts of meals I've had outside or taxi receipts," he says. "A mound of paperwork backs up any dispute. You couldn't have charged that dinner to your room if you were out at the exact same time, eating a meal in a restaurant, for example."

Similarly, a receipt for a hotel meal or spa treatment is proof that you ordered that particular service, and nothing more.

So-called "full-service" hotels like to charge you for every little thing, which can lead to errors and surprises on your bill, according to guests like Jake Richter, a technology expert based in Bonaire.

"My biggest peeve of late, with respect to extra hotel charges, has been the policy to start charging for receiving packages at large chain hotels," he says. "For someone that travels as much as I do, I rely heavily on mail order for various supplies and sundries I need, and getting nickel-and-dimed for $5 a package -- and worse yet, learning about this only at check out -- is maddening."

The solution is to never assume any service, no matter how small, will be free, and to always ask if there will be a charge.

5. Don't wait to dispute a charge

If you see an incorrect charge on your bill, notify a hotel employee immediately. Richard Atkins, a New York-based corporate trainer, has endured numerous hotel billing errors, from being charged for minibar items he didn't use to being double-billed for a hotel parking spot.

"In almost every case, a visit to the front desk resolves the issue," he says. What if you get a surprise extra charge after checkout? Atkins says he can usually get those taken care of with a phone call, although it's always better to address billing problems sooner rather than later.

Avoiding billing errors is relatively easy if you take a few simple precautions. But some billing snafus are probably best left alone.

Consider what happened to Paul Rasmussen, a vice president for a medical consulting company in Cedar Rapids, Iowa. As he was reconciling his expenses at the end of the month, he noticed an extra $60 charge from his hotel. He didn't recognize the purchase, and since he was out of the office, he asked the hotel to fax a receipt to his company's accounting department.

"When I returned from traveling, my boss called me in to ask why I charged three adult movies to the room in one night at $20 a piece and secondly, how I could watch those movies for six hours straight?" he remembers. "I obviously did not purchase those, but everyone in the company found out about it and I never heard the end of it."

Rasmussen offered to call the hotel to dispute the charges, but a manager told him not to bother.

"No," he said to Rasmussen, "it's worth the $60 in grief you will have to live with as long as you work here."

All About Hotels • Travel and Tourism