Pittsburgh: From grime to glam

PITTSBURGH, Pennsylvania (CNN) -- Just 10 years ago, you couldn't mention the words "posh" and "Pittsburgh" in the same sentence without a collective laugh. Not anymore. 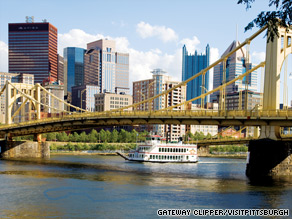 Pittsburgh is home to vibrant neighborhoods filled with distinctive shops and restaurants.

The Pennsylvanian city is not the soot-filled place that many people think it is. Closed mills and clear skies have yielded beautiful neighborhoods that feature great shopping and even better dining.

Once the security details from this week's G-20 Summit clear out of the city, visit Pittsburgh and make sure to stop in some of these trendy neighborhoods.

Formerly one of the city's seediest neighborhoods, Lawrenceville is quickly transforming into a hotspot for fledgling artists. Dotted along Butler Street are independent galleries, swanky boutiques and locally owned cafes serving gourmet food (you won't find a Starbucks here).

Watch how the city turned itself around »

Thanks to several revitalization projects, the neighborhood is now cleaner and a cool place to hang out, which is a stark contrast to its industrial past. Indulge in authentic Italian food at Piccolo Forno (try the lasagna), then stroll on down to the Who Knew? furniture gallery, which showcases retro furniture from the 1950s and '60s. Pop into the stylish SUGAR Boutique for funky fashions, or step into Pavement Shoes for chic soles.

Just a few blocks south of Lawrenceville is the bustling Strip District, where the sidewalks are lined with food stands and one-of-a-kind stores. Locals of all ages wander around Smallman Street in the Strip as they enjoy fresh coffee from 21st Street Coffee and Tea or sample biscotti nearby at Pittsburgh's own Enrico Biscotti Company. If you are in the mood for something a bit more upscale, head toward the city and try the award-winning Eleven Restaurant, which dishes out fresh American cuisine. Not hungry? Not a problem. Semi Suite Boutique sells unique kitchenware, or try Hot Haute Hot for eclectic house furnishings.

This neighborhood, where the city's bourgeoisie stroll down Walnut Street while sipping on coffee and poking along in boutiques, is not to be missed. In the city's East End, affluent Shadyside is bordered by beautiful old houses and streetside shops. Local fashionistas love e.b. Pepper for the latest designer creations. Right next door is MODA, a guy's boutique that looks like it fell out of GQ magazine. There are trendy fashions for the kids at The Picket Fence, and the Shadyside Variety Store's stock of toys will keep them entertained. Save your money for some of the neighborhoods best eats, like the fine Italian food at Girasole or drinks at the Alto Lounge.

Going eastward from Shadyside, you run into Squirrel Hill, where the neighborhood's energy jolts you awake. Always alive, Forbes Avenue features great bakeries and ethnic restaurants. It is home to young professionals and the city's large Jewish population. Bangkok Balcony has some of the city's best Thai food, or grab a coffee at the cosmopolitan 61C Cafe. If you need new specs, the local chain eyetique calls this neighborhood home and outfits the city's local celebrities with hip eyeware. Don't miss out on the popular cupcake shop Dozen, which bakes sweet cakes with an international following.

Posh is the word for this borough overlooking the Ohio River just 11 miles northwest of the city. Big, beautiful houses dot the leafy suburban neighborhood where visitors can take a break from the fast pace of the city. Whip out the wallet at Spoiled Chics boutique for unique jewelry and clothing, or try the Perfect Boutique for fashionable jeans and other wardrobe essentials for women. Zip on over to Andora Restaurant for fresh New American cuisine, or try the gourmet Sewickley Cafe for great food that won't blow your budget.

All About Travel and Tourism • Pittsburgh