Some travelers push the envelope on all-you-can-jet deal

(CNN) -- Clark Dever and Joe Dinardo have always taken things to the extreme. 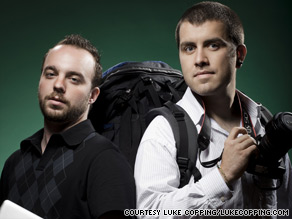 Joe Dinardo, left, and Clark Dever will be spending only 12 hours in each city before going to their next stop.

So when JetBlue announced a monthlong all-you-can-jet pass for $599, it was as if the airline had practically issued them a challenge.

"We decided to come up with the most extreme length you could take it and have the most fun without being crazy," Dinardo told CNN. "We've always pushed each other to be more outrageous, so this is just taking that to another level."

Dever and Dinardo, friends since their freshman year of college at SUNY Buffalo, will be crisscrossing the country, spending only 12 hours in each city before heading back to the airport and jetting to their next destination.

The deal allows passengers unlimited travel to all cities JetBlue services from September 8 to October 8 for $599.

Dever, who was recently saving up money to be a professional photographer, quit his job, and Dinardo decided to use all of his accumulated vacation time from his job to take the trip.

They plan to make the most of the deal, hitting at least 29 cities in the 31 days by taking about 49 one-way flights.

They'll sleep during their flights, take showers in gyms, and have friends work as runners to swap out bags of clothes when they fly into New York's JFK airport about every three days.

They've even worked with some companies to obtain sponsorships.

They plan to interview fellow fliers to get the skinny on the best places to go in hopes of taking the "local's tour" of a city as opposed to a generic tourist trip for their Web site twelvehoursinacity.com.

"What better way to get a snapshot of the United States," Dever said. "To really capture the unique culture of each city, to meet all of the different people."

Which is exactly why the promotion has received such a great deal of buzz, specifically among social networking platforms. JetBlue suspended the deal two days early, saying they were sold out, though the company declined to specify how many people bought them.

Jennifer Milano, who is taking time off from freelance work to take advantage, grabbed a pass right away. She decided that with the buzz on Twitter, she could start organizing a group of fellow all-you-can-jet travelers, calling it the 599club.

She created a site where people are sharing their itineraries in an attempt to either travel together, meet up with Twitter followers in their cities or try to couch surf at other people's homes. Some may even meet in California to go skydiving together.

Will and Cara Dearman had been planning to move to New York from Austin, Texas, when they heard about the deal. So they decided to pack up their home, bring in the movers and head off for vacation before their big move.

Given JetBlue's hub structure, many travelers found a slight hiccup: If they were in the Midwest, they might have to travel all the way back to New York to travel to the West Coast.

The couple will be spending a large chunk of their trip in South America and the Caribbean and will be doing video interviews with entrepreneurs around the world for Will Dearman's Web site, TheStrategyBlog.com.

For Greg Krause, the pass is a chance to raise money for a charity close to his heart, ­ an elementary school in Zambia that his parents created for orphaned children in a small village two hours from a main road.

Krause plans to go to 24 cities, using about 45 different flights, to have both an enjoyable vacation and hopefully meet people who will donate to the school. He also will be documenting his trip on his Web site, 30daysonjetblue.com.

Though Dever and Dinardo may have the most exhausting schedule, they, like many others, think that if nothing else, the trip will be a true adventure.

"No matter what happens, there will certainly be a story that comes out of this trip," Dever said. "For us, the biggest concern will be finding a place to shower. We certainly don't want to be the stinky guys on the plane, especially for that many flights. But either way, its going to be an adventure, a tiring but exciting adventure."

All About JetBlue Airways Corporation • Travel and Tourism • Air Travel