STOCKHOLM, Sweden (CNN) -- Bjorn Ulvaeus was one half of the songwriting genius behind Swedish pop legend ABBA. After the band split up in 1982 Ulvaeus turned his talents to writing musicals, including "Mamma Mia," now a blockbuster movie. 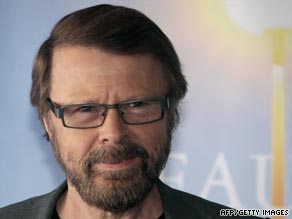 Bjorn Ulvaeus on the ABBA phenomenon: "I'm amazed how this could happen. I'm just grateful and humble."

He took My City_My Life on a tour of his home town of Stockholm and talked about his past and future as pop royalty.

CNN: What is the secret of ABBA's success?

Bjorn Ulvaeus: I think the secret behind the fact that our songs are still around and that ABBA became so big is a lot of factors together. But one of them was definitely that we put so much effort into song writing.

We hardly ever toured, we just wrote and wrote and produced the records over a period of seven or eight years. So it's the songs, plus I think the two girls, the voices -- the blend was unique and very special.

CNN: Where did get the inspiration for your songs?

BU: Well mostly in song writing my experience is that there isn't so much inspiration as hard work. You sit there for hours, days and weeks with a guitar and piano until something good comes.

But the urge to write is something you have to have. A conviction, an ambition to write and never stop until you think, "This is the best I can do."

Watch Bjorn Ulvaeus take CNN on a tour of Stockholm »

CNN: What drives you?

BU: In my career the push has always been to take another step, to try something new. That means that after ABBA, when we split up in 1982, we were onto writing a musical ["Chess"] because we hadn't done that before.

CNN: How do you feel about working in the theater?

BU: Every time I sit in the audience and watch a show that I have been involved with, it is such an amazing feeling to see all those people around me, knowing they are actually watching and enjoying something I have written.

That is such a feeling of pure joy that never goes away and that's why I guess I'm so attracted to work in the theater.

CNN: How did "Mamma Mia! The Movie" come about?

BU: When you have a big hit on the West End and on Broadway with a musical, as we had with "Mamma Mia," there is always the question, "when are you going to do the movie?"

Some people say you shouldn't do it until the actual stage musical is on its last legs, but I don't think that matters. We had been on Broadway for seven or eight years and eight or nine in the West End and we thought now is the time to make that movie.

CNN: How has Stockholm changed over the years?

BU: A city like Stockholm, being so dynamic and following trends, develops all the time. It's gradually changing but you can hardly see that. It is changing in a very healthy way that cities should change.

CNN: How would you describe Stockholm in a few words?

BU: Stockholm is unique in the world in that it's built on, I think, 14 islands. There are so many bridges and it doesn't have any high-rise buildings to speak of. It's quite spread out and open and airy with lots of parks.

CNN: Let's talk about the cultural scene in Stockholm.

BU: There is a very vibrant cultural scene in Stockholm. There are lots of places where there are concerts and there are loads of museums and theaters. There is everything really, and eventually there is going to be an ABBA museum as well.

CNN: When will that happen?

BU: I don't know -- I like to be arm's length when it comes to a museum about oneself. Other people should do that.

CNN: That's quite a Swedish trait...

BU: A lot of Swedes are quite modest and unassuming. I think that's actually the closest you can get to a national trait, if there is one.

CNN: How does it feel that people from different generations are still enjoying ABBA songs?

BU: In a way I'm kind of a bystander looking at this phenomenon that is ABBA, which is still around, and that I thought would be finished in 1981 and forgotten.

I'm amazed how this could happen and I don't know why it happened. I'm just grateful and humble. I just sit back and enjoy.

CNN: What would you like your legacy to be?

BU: I would like for my children to feel that what I left behind was something that I did whole heartedly and with honesty, and something that was the best I could do and hopefully that they too can enjoy.

All About ABBA • Stockholm