ATLANTIC CITY, New Jersey (CNN) -- In Atlantic City, New Jersey, a bomb maker pieces together an improvised explosive device that looks like an innocuous stack of DVDs. But this bomb maker isn't a terrorist. He is a U.S. government employee trying to beat terrorists at their own game. 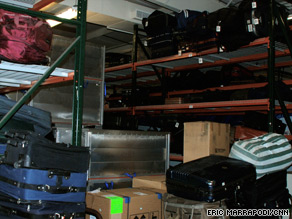 Unclaimed bags are used in testing at the Transportation Security Laboratory in Atlantic City.

Patrick O'Connor is part of a team of researchers trying to improve current bomb detection technologies and develop new ones at the Transportation Security Laboratory in Atlantic City. Their goal is to secure aviation from terrorists.

"It is a game of cat and mouse," says Susan Hallowell, the director of the lab. "We understand what they are doing, and they understand in some measure what we are doing, and we try to counteract that with better, improved technology."

One of the lab's tried-and-true techniques is to use the latest intelligence from the military, CIA, FBI and friendly foreign governments to manufacture improvised explosive devices like those being built by terrorists. O'Connor and other bomb makers pack some of the bombs in electronic devices like radios. Others are concealed in shoes and slippers, or even toys.

Some of the IEDs are then taken to the Abeerdeen Proving Ground in Maryland, where the Department of Defense does its bomb testing, and detonated inside old airplane fuselages. These tests tell researchers whether a particular type of IED has the capacity to bring down an aircraft in flight.

Back in Atlantic City, the bombs are also put in luggage and run through screening machines like those deployed at the nation's airports. Sometimes the machines detect bombs. When they do not, researchers try to figure out why, and modify the machines to do a better job.

The luggage used in the testing is the real thing: lost bags, which airlines were unable to reunite with their owners. The lab has more than 10,000 of them piled in a warehouse and it knows exactly what is packed in each and every one, from shampoo and dirty laundry, to shoes and electronics.

Sometimes they find the unexpected, like an artificial limb. In one instance, lab personnel discovered a recently severed ram's head in a suitcase. "That kind of found us because of the odor that was coming off the bag, but it was probably the strangest thing we have found over the years," says Bill Petracci, test director at the lab.

Petracci has coined the term "bag-ology" to refer to the study of the suitcases. Even when a bomb has not been hidden inside, Petracci and his team run fully packed bags through screening machines to learn what items cause false alarms. Scientists then work to eliminate them.

The laboratory is operated by the Science and Technology Directorate of the Department of Homeland Security, but the Transportation Security Administration is its principal customer. All of the screening machines used by the TSA have been certified by the lab. The TSA coordinates closely with the lab on research which will hopefully improve the capacity to find bombs.

"We can become more effective in our detection and more efficient," says Robin Kane, a TSA assistant administrator.

The work done at the lab has already helped improve the machines currently deployed at the nation's airports, but much of the focus here is on developing new technologies to defeat terrorists.

In one area of the lab, scientists use modified medical technology to do high resolution scans of explosive material. They are trying to determine if they might someday be able to ferret out explosive material by examining its density and granularity.

In another area, scientists are trying to crack the problem of detecting liquid explosives, by capturing and measuring the gases emitted by a homemade explosive concoction that has been concealed in a cold medicine bottle.

Hallowell concedes that, as promising as the research seems, some of the technology is still too expensive or time-consuming to work in a real-world environment full of people, noise, vibrations, dirt and electromagnetic signals.