NEW YORK (CNN) -- Thirty people joined National Park Service rangers Saturday in climbing to the crown of the Statue of Liberty, the first tourists to go into the landmark's crown since the 9/11 attacks. 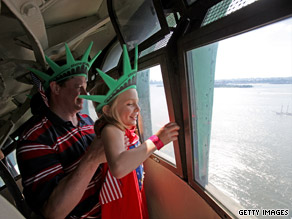 Chris Bartnick, 46, and daughter Aleyna, 8, of Merrick, New York, look out from the statue's crown on Saturday.

The New York Harbor monument was closed after the terrorist assaults on the World Trade Center and the Pentagon for safety and security reasons, the Interior Department said.

"Once again, Americans can climb to Lady Liberty's crown and gaze out over New York Harbor, where so many of our ancestors first saw the New World and first breathed the fresh air of freedom," Interior Secretary Ken Salazar said as he welcomed visitors back on the Fourth of July holiday. "This is a celebration of America and the joy of being an American."

Visitors on Saturday were grateful they could go inside the landmark.

"It's just basically safety for our country and at least they opened it," visitor Ira Semapadilla told CNN affiliate NY1 before the visit. "That's one thing that I was like, wow, I'm never going to experience it. ... They ruined it for us.

"Now that it's going to open again I'm excited, and I'm just really looking forward to being in there."

Even with the reopening of the monument, only a rare few will get to scale the 354 steps to the crown.

Only 10 visitors are permitted to ascend the steps at any one time, meaning about 240 people can make the climb during the park's 8:30 a.m. to 6:15 p.m. hours of operation.

The opportunity to climb Lady Liberty will end again in two years, when work will begin on further safety and security upgrades.

All About Statue of Liberty • Parks and Historic Sites