LONDON, England -- Graffiti artist Banksy, famed for infiltrating museum collections without their knowledge and spray-painting public buildings around the world, is holding his first major exhibition in years. 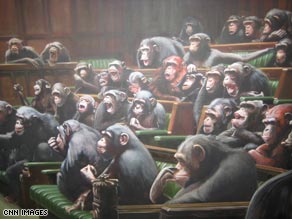 A Banksy painting of the British House of Commons at England's Bristol museum.

This time, however, the anonymous artist worked in tandem with the director of Bristol museum in the UK.

CNN's Max Foster got a preview of his largest project to date.

The artist's anonymity gained him notoriety and he became one of the art world's biggest names with his works selling at auction for hundreds of thousands of dollars.

The exhibition's range, while very varied, remained true to Banksy form with his usual unconventional take on art.

"I think we might have dragged them down to our level rather than being elevated to theirs" Banksy, who is thought to be from Bristol, said about the museum.

He filled three stories of the building with his art in 36 hours under tight security, as only a few museum staff were aware of the shows' imminent arrival.

His work is hidden among the museum's usual exhibits and is split into different rooms, including installations, paintings and sculptures.

In one of the paintings, a character has been cut out and is instead sitting on the painting's frame, perhaps taking a break from posing?

Another piece, which at first glance, looks like a copy of an ancient classical statue, is in fact a woman over-loaded with countless shopping bags as she browses for yet another item.

Perhaps the most controversial, yet equally light-hearted piece, is a painting of the British Parliamentary House of Commons, filled with chimpanzees who are looking surprisingly "ministerial."

"You paint a hundred chimpanzees and they call you a guerilla artist," Banksy said.

While one of the more poignant installations is that of Tweety, the Warner Bros. animated character famous for his upbeat personality and energy, looking old and life-less.

"This show is my vision of the future," the artist said .

Banksy is unlikely to show up at the exhibition as he attempts to retain his anonymity.

But while we may never know his identity, with this latest show, Banksy has definitely shown yet another facet of his personality.