Pilot fatigue is like 'having too much to drink'

(CNN) -- Co-pilot Rebecca Shaw traveled all night as a passenger aboard FedEx planes before she got on the commuter plane that nosedived into a house near Buffalo, New York, killing all 49 passengers on an icy February evening. 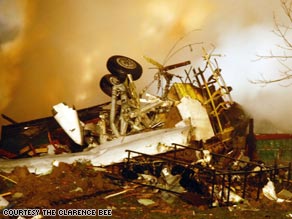 The 24-year-old, with a year of experience, was living in Seattle, Washington, and commuting to Newark, New Jersey -- where the fatal Continental Flight 3407 operated by Colgan Air Inc. originated, according to investigators at the National Transportation Safety Board hearings this week.

Shaw had three days off before the flight, then commuted through the night from Seattle, catching rides on FedEx flights to get to Newark.

"Her body basically said, 'I can't handle it,' " speculated Greg Feith, former NTSB air safety inspector. "I mean, we've all been there before and pulled an all-nighter. We know how that feels."

Colgan Air, the regional airline Shaw worked for, said Shaw did not "reserve adequate time to travel from her home to her base in order to ensure she was properly rested and fit for duty."

With fatigue being a possible factor in the crash, the testimony at this week's NTSB hearings is reigniting industry concerns over pilot fatigue. Airline accidents caused by fatigue are listed on the "Most Wanted Transportation Safety Improvements" on the NTSB Web site.

In the last 16 years, fatigue has been associated with 250 fatalities in air carrier accidents, Robert Sumwalt, NTSB vice chairman, said at an FAA symposium in July.

The other pilot on the ill-fated flight, Capt. Marvin Renslow, 47, who had been with Colgan more than three years, had nearly a full day off before assuming command of Flight 3407. The NTSB investigation found he slept in the Newark Airport crew lounge, against Colgan Air regulations.

While there is no way to tell if the pilot is rested when one steps onto a plane, there are Federal Aviation Administration guidelines on how many hours a pilot can work and how many hours he or she must rest.

While some industry experts have pushed for better guidelines and shorter work hours over the years, the rules have remained unchanged since the 1940s. In 1995, the FAA came close to altering the guidelines, but industry members couldn't agree on the changes.

FAA regulations for regional and major airlines dictate that pilots can only fly planes for eight hours during a 24-hour period. When a pilot finishes the shift, he or she should have had at least nine hours of consecutive rest during the 24-hour period. Pilots can fly up to 100 hours in a calendar month and 1,000 hours a year.

While the rest time may sound adequate, some industry experts said the guidelines disregard flight delays, jet lag, increased workload, multiple flight legs and night flights. Pilots also work untraditional hours -- sometimes in the middle of the night -- which can disrupt the body's circadian rhythm even when they do get sleep, according to reports at the Flight Safety Foundation, a nonprofit dedicated to improving aviation safety based in Alexandria, Virginia, created in 1947.

Even though pilots receive breaks, the time off doesn't guarantee they'll sleep, industry experts said. Sometimes pilots have to commute to work, as in Shaw's case, or travel between the airport and hotels.

In recent years, some airlines have tried to reduce flight fatigue on long international flights by adding pilots or allowing pilots to take nap breaks on planes, industry experts said. But little has been done for short-haul trips.

Bill Voss, president of the Flight Safety Foundation, said policies involving fatigue can be difficult to implement because workers don't like having their employers interfere with their personal lives. "It's hard to tell people what to do during their day off," he said.

Voss, a former pilot, said he'd felt fatigue while on the job. "There are times you work long hours," Voss said. "It's insidious. It's just like any other impairment. It's like having too much to drink. It can sneak up on you."

At an FAA symposium last year, John A. Caldwell, a fatigue management consultant for the U.S. Air Force and U.S. Army, talked about a phenomenon called "micro-sleep." A pilot falls asleep for a fraction of a second to several seconds because of sleep deprivation. Caldwell said his research found that 80 percent of regional pilots admitted to nodding off during a flight.

Mark Rosenker, NTSB acting chairman, said at this week's hearings that airlines may have to toughen enforcement of their rules to improve air safety.

"I am concerned about the winking and nodding I've seen in some of the policies of the company, your company, and crew members, and I don't believe it's only within your company," Rosenker said of Colgan Air.

Joe Sharkey, an airline writer for The New York Times and an airline industry blogger, recently wrote in his blog "High Anxiety" that the investigation reveals that problems facing airline pilots extend beyond fatigue. Pilots are also underpaid, which can pressure them to get second jobs and consequently tire them more, he said.

Colgan pilot Shaw earned about $24,000 a year, according to Colgan testimony at this week's hearings. She commuted cross-country from Seattle so she could live with her parents to save money. NTSB officials said investigations showed Shaw worked at a coffee shop while working as a pilot when she was stationed out of Norfolk, Virginia.

Roger Cohen, president of the Regional Airline Association, which represents 30 member airlines including Colgan Air, said all airlines follow FAA guidelines. Airlines and pilots who do not follow federal policies may face punishments like suspensions and fines.

Most airlines also have aviation safety programs where they can voluntarily disclose if they are being overworked, said an FAA spokeswoman.

Cohen said regional pilots are no more susceptible to fatigue than mainline pilots, despite recent media reports that pilots flying smaller regional flights may be more overworked and underpaid.

"The No. 1 commandment of flying is that when you sit in the cockpit that you are fully prepared, safe and fit to fly," Cohen said. "That's the basic responsibility of every pilot."