Despite warnings, some travel to potential danger zones

(CNN) -- A few weeks ago, when violence and kidnappings along the U.S.-Mexico border were all over the news, Todd Sotkiewicz took a group of high school students to Tijuana, Mexico. 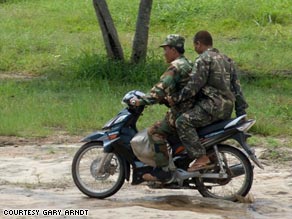 Gary Arndt traveled to Cambodia to see a temple. He also found soldiers, but says he wasn't afraid.

The teens' parents had to be warned that the service-oriented spring break trip might go against a federal travel alert, he said. But, in his view, the value of the experience, which involved building homes for impoverished families, trumped any perceived threat.

"These poor families really needed these houses," said Sotkiewicz, a parent of one of the students and also the president of Lonely Planet in the Americas. "We went down there and we took the appropriate precautions like we all should."

While the H1N1 flu virus has stirred fears about international travel and has brought renewed attention to government travel advisories, there remains a hearty group of travelers who say such official advice doesn't dictate whether they will or won't take a trip.

For some, voyages into warned-against places are less motivated by adrenaline and more by a genuine desire to experience the world in a new way. Danger is part of the human experience, some of these travelers say. It's something that can't be avoided entirely and should be assessed by well-informed individuals, not just by governments.

"It was not a draw that there was a dangerous element to it," Sotkiewicz said of the Mexico trip. "The draw was that [the students] wanted to have a transformative experience."

The Centers for Disease Control and Prevention recommends U.S. residents avoid all nonessential travel to Mexico because of swine flu. The U.S. State Department still has an alert out concerning violence in the country. A spokeswoman for the CDC said travelers should follow official government guidance when making their plans.

Robert Young Pelton, an author who has traveled to 120 countries and seen 36 wars, said people can and should travel wherever they want to, regardless of warnings. Such adventures offer intellectual stimulus and have the potential to draw meaningful connections between people, he said.

"The reason why it's important to go to places that you dreamed of or are intensely interested in is because it matters," he said. "I could send you to Disney World for a week and I don't think you would change a bit, but if I sent you to a Rwandan refugee camp, I think you would change peoples' lives, and you would be changed by it."

He says travel warnings, like those concerning H1N1, are politicized. The hysteria about this strain of flu is driven more by an irrational fear than by actual danger, he said.

"It's a fascinating fear. It's not a danger," he said of the flu. "So when people say, 'Oh, it's dangerous in Afghanistan,' or, 'It's dangerous in Mexico,' what are they basing that on? They obviously haven't been there."

Sotkiewicz said travel deals tend to pop up in destinations that are stigmatized by a health outbreak or a terrorist attack. This was true after the Madrid, Spain, attacks, as well as the SARS and bird flu epidemics, he said.

In a statement to CNN, Expedia, the travel Web site, said a travel warning like the one for swine flu "ultimately creates travel values for consumers."

"As the swine flu subsides in Mexico, we expect travel suppliers in the area to offer significant deals to increase demand for the region," Expedia said.

When asked if some people might wish to travel to Mexico despite the advisory, perhaps for a hotel deal, CDC spokeswoman Shelly Diaz said travelers should heed the warning.

"Your health should come before your wallet. There's nothing more valuable than your health," she said. "We are recommending that people avoid travel to Mexico unless it's essential. I don't know that a really good travel bargain makes it essential."

Melvin Francisquini, a 31-year-old from Miami, Florida, who is volunteering in Mexico City, said this actually wouldn't be a bad time to visit Mexico except everything is closed. On Tuesday, only a handful of people were still wearing flu masks in the subway, he said. Follow Francisquini's video posts on iReport

"Come if you're fine with everything being closed," he said. "I mean, even museums are being closed, but don't be afraid of the flu. It's nothing out of the ordinary." Avoiding Mexico specifically because of the flu is ridiculous, he said.

People who travel into potentially dangerous places seem to have their own rules for deciding what's safe and what isn't. Several said they factor in government warnings and news reports. Others consider crime rates and statistics.

The trend seems to be for people to look for online information that comes directly from travelers in the country where they want to go.

These on-the-ground observations are important because U.S. news stories about foreign countries tend to focus on crime and terrorism and not what life is actually like for people, said Pelton.

"Millions of people get up every morning and go through their entire day with nothing actually happened to them, but the media will never write a story that says, 'Nothing happened, everything's fine,' so we tend to be inundated with stories about" violence, he said.

He added: "Yes you can order a latte in Kabul and Somalia has hotels for 40 bucks a night."

Gary Arndt, a 39-year-old who sold his assets and has been blogging about his world travels since 2007, said many American travelers have a "fear of the unknown."

Arndt was in Israel when swine flu broke out. He said he would have no qualms about traveling to Mexico because of the swine flu.

He recently traveled to a region of Cambodia that is considered dangerous by some. He also went to Thailand at a time when most travelers were "freaked out" by government protesters. Prices for hotels at the time were lower because the country was emptied of tourists, he said.

"I'm not the kind of person that is an adrenaline junkie," he said. "I did bungee jump once [but] I've never gone skydiving, I don't go rock climbing. It's not like I want to go into these places because they're dangerous.

"I just think the risk is often overhyped."