(CNN) -- Sixteen applicants arrived in Hamilton Island on Sunday for the final interviews to pick a caretaker for the tropical paradise in Queensland, Australia. 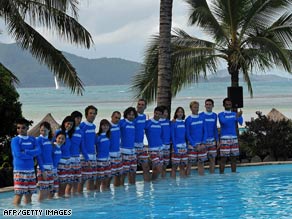 The 16 finalists for caretaking an island are shown on Sunday arriving at Hamilton Island.

A television presenter from New Zealand and a charity fundraiser from England were among the finalists for the position, dubbed the "best job in the world." They were picked from a pool of more than 34,000 applicants from across the world.

The six-month caretaker will be paid $100,000 and is required to feed the fish, clean the pool and send weekly blog and video reports on what is happening on the island.

"For four years, we've been doing exactly what the job requires ... sharing our life online, producing video and blogging on a daily basis," Cali Lewis, a finalist from Dallas, Texas, said in her profile on the contest Web site.

The 28-year-old and her husband run a Web site that reviews tech gadgets, according to her profile.

Hailey Turner, 20, is the only Australia resident among the finalists.

"Like any true Queenslander I was born here and have never wanted to live anywhere else," Turner said in her profile.

Finalists, who were short-listed from a pool of 50, used various attempts to woo their prospective employer, from wandering round a chilly city center in a bikini, to making their application in the form of a street musical, complete with chorus singers.

The winner will get a free home and generous perks on the island, including free access to surrounding recreational facilities. Other benefits include free return airfares from their nearest capital city, transport on the island, computer and camera gear and travel to other islands in the Great Barrier Reef off Australia

Results will be announced Wednesday and the caretaker post starts July 1.