(Tribune Media Services) -- If you want to save money while traveling, consider hosteling. Several thousand hostels provide beds throughout Europe -- in cities, towns, and the countryside -- for $20 to $40 per night. 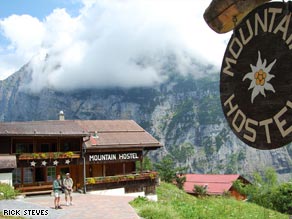 Some hostels are really travel destinations, such as the Mountain Hostel in Gimmelwald, Switzerland.

For this rock-bottom price, you get "no frills" accommodations in clean, stark dormitories. The good news for couples and families is that many hostels have a few doubles and some family rooms (book ahead for these). It's a great way to enjoy some privacy while saving money.

You may assume hostels aren't for you because, by every standard, you're "old." Well, many countries have dropped the word "youth" from their hostel organization's name, and for years Hostelling International has given "youths" over the age of 54 a discount on membership cards. Even the last holdout, the German state of Bavaria, finally dropped its youths-only restriction. If you're alive, you're young enough to hostel anywhere in Europe.

A reader wrote on my Web site: "My partner and I stayed in a 'youth' hostel for the first time by Lake Como and thought we'd be the oldest people there. Not so! At our table was a 60-ish couple from Sydney and a 79-year-old British woman who was backpacking alone through Europe. All three were a delight, but especially the backpacker, who said she stays in hostels for the evening company."

Solo travelers find a family in every hostel, and can always find a new travel partner. The hostel's recreation and living rooms are my favorite hangouts. People gather, play games, tell stories, share information, read, write, and team up for future travels. The lights may go out by 11 p.m., but bunk-bed conversation rages long after. You'll find yourself propped on your elbows staring intensely into the darkness, passing around travel tales like a bucket of popcorn.

Some hostels serve hearty, super-cheap meals, often in family-style settings. A typical dinner is fish sticks and mashed potatoes seasoned by conversation with new friends from Norway to Namibia to New Zealand. The self-service kitchen, complete with utensils, pots, and pans, is a great budget aid that comes with most hostels. Larger hostels even have a small grocery store. International friendships rise with the bread in the kitchens.

Still, hostels are not hotels -- not by a long shot. Many people hate them. Hostels can have strict rules. Some lock up during the day (usually from 10 a.m. to 5 p.m.), and a few may have a curfew at night, when the doors are locked.

Unless you snare a double or family room, you could have lots of company. Dorms have from four to 20 beds. At official hostels, which require a membership card (see www.hiusa.org), the sexes are segregated. Many independent hostels have both segregated and mixed dorms (no membership card required).

School groups can turn hostels upside down, typically on weekends during the school year and weekdays in the summer. The sounds you'll hear just after everyone's turned in remind me of summer camp -- giggles, burps, jokes, and strange noises in many languages. Snoring is permitted and practiced openly.

Theft can be a problem in a few hostels, but try this simple safeguard: Wear your money belt (even while sleeping) and don't leave valuables lying around (but no one's going to steal your tennis shoes or journal). Use the storage lockers that are available in most facilities. (Other typical hostel services include Internet access and a self-service laundry.)

I've hosteled most in Northern Europe, where hostels are more comfortable and the savings over hotels more exciting (particularly in Scandinavia, where you find lots of Volvos in hostel parking lots, as Scandinavians know that hostels provide the best -- and usually only -- $30 beds in town). I rarely hostel in the south, where hostels are less common, and two or three people can sleep just as cheaply in a budget hotel.

Young backpackers can overrun big-city hostels. Rural hostels, far from train lines and famous sights, are usually quiet and frequented by a more mature crowd. If you have a car, use that mobility to leave the Eurail zone and enjoy some of Europe's overlooked hostels.

Some travelers love them and will be hostelers all their lives, regardless of their budgets. Hosteling is a philosophy. You trade service and privacy for a chance to live simply and communally with people from around the world.