(CNN) -- Americans hungry for feel-good fine dining are reaping the benefits of the struggling economy. 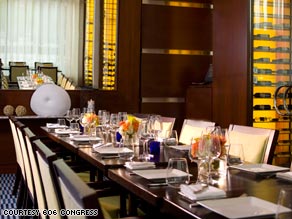 606 Congress in Boston, Massachusetts, is offering a three-course "appetite stimulus" deal for $25.

Wine deals, bar menu specials and three-course, prix fixe meals for $25 to $40 are popping up in high-end eateries across the country to lure customers as business and leisure travel dips and diners stay closer to home and make more value-driven decisions about eating out.

For Manhattan restaurateur Paul Grieco, sticking to good food and the warm, hospitable philosophy of his East Village restaurant, Hearth, is key to devising dining promotions to combat a 20 percent dip in business from the same period last year.

"Every restaurant out there is leading with the discount, and the consumer -- it's become one big blur. We're all competing against each other -- none of us are coming out winners," Grieco said.

To differentiate Hearth this winter, Grieco and the restaurant's chef created five winter soups available at the bar for $5 each, paired with $5 glasses of sherry. This spring, Grieco plans to offer $5 spring salads.

Grieco said he hopes the special menu items and prix fixe offering will attract more neighborhood diners to Hearth, one of the most expensive restaurants in the East Village.

"You need that neighborhood crowd, and because of our price point, maybe not everyone in the East Village was able to come to Hearth. Well, we need to change that," Grieco said.

Taking menu price inflation into account, the National Restaurant Association expects the restaurant industry's sales to decline by 1 percent in 2009. A similar drop in 2008 makes for the first consecutive back-to-back decline for the industry since the organization started tracking sales in 1970.

"This is currently the most challenging environment for restaurant operators in several decades," said Hudson Riehle, head of research at the National Restaurant Association.

While the decline is relatively small compared with other industries, pricier restaurants take a bigger hit in a down economy, and establishments that rely heavily on travelers are likely to feel the economic slump acutely as total travel expenditures in the U.S. are expected to dip by 6.7 percent in 2009, according to the U.S. Travel Association.

At national seafood chain McCormick & Schmick's, 35 percent to 40 percent of the customer traffic, on average, comes from business travelers, according to CEO Bill Freeman. Sales through the end of February were down 13 percent from last year.

The restaurant is offering a steak and lobster dinner with dessert for $29.95. Increased focus on local promotional opportunities around holidays such as Mother's Day and Father's Day and an enhanced preferred guest program also are part of the company's efforts to drive sales. The preferred guest program allows diners to amass points that can be redeemed for food in the restaurant and some travel-related awards.

In Charleston, South Carolina, where many upscale restaurants rely heavily on tourism, those that are coping best are adding value without compromising their price integrity, according to Robert Frash, an assistant professor in the College of Charleston's Department of Hospitality and Tourism Management.

"Rather than lowering their prices or offering coupons and discounts that are inconsistent with fine dining, they're trying to give [customers] a better value. Perhaps where they were priced a la carte before, now it might be more of a prix fixe menu," Frash said.

The Charleston Grill, in the Charleston Place Hotel, started a dinner at dusk promotion in January. The three-course menu for $39 is available seven days a week to diners who are seated before 6 p.m.

Similar value-driven promotions are available at other hotel-based restaurants. 606 Congress, in the Renaissance Boston Waterfront Hotel in Massachusetts, will resume a popular "appetite stimulus" menu on April 13. For $25, guests receive an appetizer, entrée special, dessert and a glass of wine.

Wine promotions are another customer lure. Patina Restaurant Group, which operates more than 20 restaurants, is wrapping up a wine promotion at East Coast establishments March 31 that gives customers 25 percent off all bottles.

The promotion finished a successful West Coast run at the end of February, and the company is now waiving corkage fees at most West Coast restaurants.

"That is something that has been wildly successful ... just getting people in the door," said spokeswoman Amanda White. "We figure if people don't need to pay for wine, they'll spend more on food."

Promotions and sales declines aside, Americans are still dining out, according to Riehle of the National Restaurant Association.

"Restaurants have become so ingrained in American lifestyles now, and the consumer reliance upon them in some cases deems it a much more essential experience than a discretionary experience."