On 'nakation,' forget worries and clothes

(CNN) -- There's something about being naked that makes a person forget a layoff, pay cut or a shrunken retirement account. 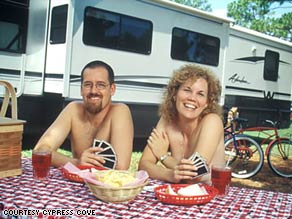 Promoters say nude vacations offer a complete escape from stress and the norm.

At least that's how the promoters of nude travel see it.

The economic recession is "doing us a lot of favors, maybe because there's the idea that if you've lost the shirt off your back, you should go nude," said Erich Schuttauf, executive director of the American Association for Nude Recreation.

He added: "You go to a [nudist resort] and when you take off all your clothes, all the cues that tie you to the workaday world -- the ties, the suits and everything -- when that's gone, your body says it's time to relax. You get in that mode faster."

While some nude-resort owners say they're cutting back because of the recession, others said they're on par with last year's budgets or are expanding their services. Overall, being naked brings in big bucks. According to Schuttauf, the industry is valued at more than $400 million annually.

Boom or bust, here are Schuttauf's top five places to forget your worries -- and your swimsuit.

"Typically, sunblock is all that you need," he said.

Near Disney World and Orlando, Florida, the Cypress Cove Resort offers a range of recreational activities, including biking, a lakeside beach and a small golf course.

The resort's location and nice weather make it attractive, said Ted Hadley, manager of the 300-acre resort, which features a hotel, camp sites and permanent residences.

Hadley said the resort is faring well, compared with years past. For many, nude vacations are like an addiction or a necessity, he said.

"It's something that [nudists] really enjoy and something they're not going to give up unless they absolutely have to," he said. The resort is "a place where they come to relax and unwind and relieve themselves of stress."

In a business where sunshine and warmth are pretty darn important, Michigan's Turtle Lake Resort has to get a little creative to keep clothes-free customers coming.

One of its prime features is an 11,000-square-foot clubhouse -- with a BYOB policy, a dance floor and plenty of heat pumped in.

The resort also offers a lagoon, tennis courts and volleyball. Attendance for last year was up 9 percent, compared with projections, said Mark Hammond, general manager and co-owner of the resort.

And despite the frigid Michigan weather, the resort is a year-round draw, Hammond said. During winter months, it offers rooms for $42 to $90 per night.

"We're nudists, we're not stupid," he said. "When it gets cold, we put our clothes on."

Near Spokane, Washington, and Coeur d'Alene, Idaho, the Sun Meadow resort is another cold-climate nudist retreat with ample side attractions.

Schuttauf said its finest attributes are its indoor pool, meeting space and music.

Cabins, RV sites and a limited number of hotel rooms are available.

With 1,600 members, Laguna del Sol, near Sacramento, California, is among the largest nudist resorts in the country, Schuttauf said.

The resort offers four pools, three spas and a fitness center. And if you're not ready to dive into a naked vacation just yet, the resort offers free tours between 10 a.m. and 3 p.m. on Fridays, Saturdays and Sundays.

The resort offers a library for naked reading, a naked fishing pond, naked wine tastings and naked hikes (through the snow, no less, and making snow angels is encouraged).

Avalon also hosts a "Nude Year's Eve" gala, according to its Web site. Men are asked to wear a cummerbund and bow tie only.