Delta one of top airlines to get an 'F' in report

(CNN) -- Far too many passengers are being stranded on board commercial flights in the United States in delays, an air passengers' rights group said Wednesday. 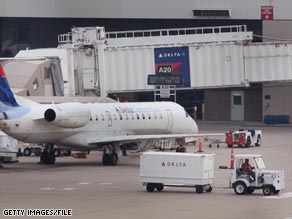 FlyersRights.org, in issuing what it calls an air travel consumer report card, said there were more than 1,200 tarmac strandings -- in which passengers are locked in planes on the runways -- in 2008.

Delta Air Lines had the greatest number of tarmac delays longer than three hours. Southwest Airlines was rated the best for handling delays by letting customers get off delayed planes, as well as providing food, water and other items.

The longest delay the organization found was a January 2008 Delta flight from Atlanta, Georgia, to Florida, in which passengers waited on the tarmac for more than 10 hours without food and water.

Hanni -- who has been lobbying for an airline passengers' bill of rights -- also said America's economic situation has exacerbated the problems consumers face on the airlines because of layoffs.

"Airlines are trying to maintain or increase their profit margins," she said. "They have decreased all of their goods and services related to flying."

She added that a timely flight is "not just a matter of passenger convenience, it's a matter of public safety."

"I wonder if heroic Captain Chesley 'Sully' Sullenberger and his crew could have performed as they did after seven, nine or even 12 hours on the tarmac?" Hanni asked, making a reference to the US Airways crew that made an emergency landing in New York's Hudson River in January.

Hanni started her organization after she was stranded on the tarmac on an American Airlines flight in Austin, Texas, for more than nine hours in December 2006. Mark Mogel, the group's research director, said FlyersRights.org has about 24,000 members, many of whom donate money, services and lobbying help.

The report card is based on government statistics, press reports, airline Web site data, reports on the group's hotline, and eyewitness accounts from January to December of 2008.

It surveyed 17 airlines for various kinds of tarmac delays, their menu and contracts of carriage and customer service commitments and issued grades for these separate factors and an overall grade.

As for the menu, Mogel specified that the menu grade is based on quantity, not quality. The survey was looking to see whether there would be food on board during a tarmac delay.

United Airlines, Airtran and American Eagle got a "C." Alaska Airlines, Northwest Airlines and Frontier Airlines got a "B," and Southwest received an "A."

Five other airlines -- Atlantic Southeast, Comair, ExpressJet, Mesa and Pinnacle -- didn't get an overall grade because some categories couldn't be completed.

"The fact that some airlines have received A's and B's and others D's and F's on this report card also shows that providing decent customer service and avoidance of strandings is both achievable and should not place an undue burden on the airline industry or lead to higher ticket prices," the report's executive summary said.