(CNN) -- With the economy sputtering along, buying a plane ticket for a getaway may not be a priority. 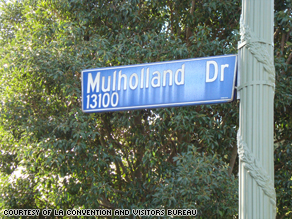 A trek down Mulholland Drive in Los Angeles, California, offers gorgeous views of the city.

But that doesn't mean there aren't great jaunts nearby.

Just about every city across the country has options for day trips, where for the cost of a tank of gas the urge for travel can be satisfied. Some trips don't even have to take a full day.

The following are just a few great day trips from cities around the country for when money or time is tight.

Just slightly more than 60 miles from Fargo, the Sheyenne River Valley Scenic Byway stretches from Baldhill Dam northwest of Valley City, North Dakota, to Lisbon, North Dakota, and is one of state's most scenic areas.

The towns along the Byway offer a little something for everyone -- dining, shopping, historic sites, skiing, hiking and canoeing.

Cole Carley, president and chief executive officer of the Fargo-Moorhead Convention and Visitors Bureau, said that from the bridges of Valley City to the bluffs and winding roads of Little Yellowstone Park, the entire area is breathtaking.

"The geography in the eastern part of the state can be flat," he said. "But the Sheyenne River Valley is very picturesque."

In the age of the immediacy of e-mail, it might be hard to imagine that mail used to take weeks and sometimes months to arrive at its destination.

St. Joseph, Missouri, is the home of the Pony Express. Founded in 1860, the mail service saw men on horseback traveling hundreds of thousands of miles cross-country with their parcels.

St. Joseph is home to a museum that honors the Pony Express. Visitors can also head over to the Jesse James Home to learn about the outlaw's life, and ultimate death, in the city.

Being steeped in history and the tourist-friendly nature of the city make St. Joseph an ideal destination, said Alan Carr, director of communications for the Kansas City Convention and Visitors Association.

"Around Kansas City we have a great deal of diversity," he said. "Whether you are interested in history, culture, art or food, you can have a lot of great experiences in and around Kansas City."

Located on the Eastern Shore of the state, near the Miles River and the Chesapeake Bay, the area has the advantage of being close to Baltimore, Maryland, Philadelphia, Pennsylvania, and Washington.

Camila Clark, a spokesperson for the Maryland Office of Tourism, said the town benefits from its location.

"It has a rich maritime history," she said. "It has upscale cuisine and accommodations as well as great shopping."

The cuisine of choice anywhere near the Eastern Shore is often seafood and St. Michaels has plenty. Visitors can also enjoy the fishing, cruising and sailing before popping over to the Chesapeake Bay Maritime Museum.

From Dallas, Texas -- Fort Worth, Texas

Not only is Fort Worth the 17th largest city in the United States, but it was also recently named No. 2 in terms of being a value-friendly destination by Hotwire.com.

Those venturing the 45 minutes from Dallas to Fort Worth can opt either to come by car or to take the Trinity Railway Express train, which stops in downtown Fort Worth.

Once in the city, an array of activities awaits visitors. Three entertainment districts -- Sundance Square, Stockyards National Historic District and Fort Worth Cultural District -- are within a few miles of each other and are the site of shops, restaurants and museums.

Because they do everything bigger in Texas, the Stockyards National Historic District offers the Fort Worth Herd cattle drive, where a group of cowhands dressed in the old West style drives a herd of longhorns along Exchange Avenue through the Stockyards twice a day.

There may not be a ton of shops or restaurants to visit, but when it comes to views, Mulholland Drive can't be beat.

Because driving is as deeply engrained in the Southern California culture as sunshine, jumping in a car and heading down the seven mile stretch that is Mulholland Drive is a no-brainer.

The road winds past celebrity homes and some of the city's most beautiful architecture.

Spanning a portion of the Santa Monica Mountains, Mulholland Drive will tempt cruisers to pause during the ride to take in the one-of-a-kind views of the Hollywood Hills and San Fernando Valley.