ATLANTA, Georgia (CNN) -- The return of peanuts to the snack menu at Northwest Airlines this month has prompted a spasm of protests from travelers with allergies. 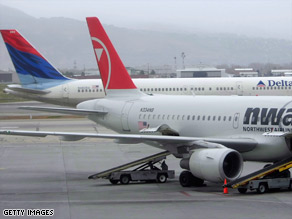 The change comes four months after Northwest merged with Atlanta-based Delta Air Lines and in the midst of a national salmonella outbreak involving Peanut Corporation of America. Georgia, where the company has a plant, is the top peanut-producing state in the country.

Northwest began handing out the goobers as snacks on February 1, as Delta has been doing for years.

In Minneapolis, where Northwest is based, news of the change has resulted in a flood of responses on the Web site of the Star Tribune, a local newspaper.

"This is a very disappointing development," wrote one man who responded to the story. "My wife's allergy is so severe that if someone is sitting next to her and eating peanuts, the odor is enough to trigger an allergic reaction."

"Northwest is really out of touch with its customers and the reality of allergies to peanuts," wrote another reader. "What's wrong with pretzels?"

The Centers for Disease Control and Prevention says more than 3 million Americans are allergic to peanuts or tree nuts, while nearly 7 million are allergic to seafood. Combined, food allergies cause 30,000 cases of anaphylaxis, 2,000 hospitalizations and 150 deaths annually.

Delta says it will make accommodations for those with peanut allergies, if a request is made.

"We'll create a buffer zone of three rows in front of and three rows behind your seat," the airline's Web site says. "We'll also advise cabin service to board additional nonpeanut snacks, which will allow our flight attendants to serve these snack items to everyone within this area."