(Tribune Media Services) -- "There's a plane in the Hudson. I'm on the ferry going to pick up the people." 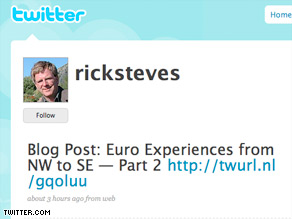 Microblogging on sites like Twiter could enlighten and empower travelers.

Those words, hastily typed on Janis Krums' iPhone just after US Airways flight 1549 crashed into the Hudson River last month, marked yet another milestone in the microblogging revolution.

Krums, a Sarasota, Florida, entrepreneur, posted his observations and a compelling photo of a half-submerged aircraft to Twitter, where it was seen by hundreds of people before other media organizations knew about the accident.

Twitter and related sites such as BrightKite have been breaking news since they've been around. They've offered first-hand accounts of events such as the terrorist attacks in Mumbai, the Virginia Tech shootings and California's wildfires.

Before Krums scooped the New York media on the biggest news story of the year so far, there was Mike Wilson, aka "2drinksbehind," who twittered his observations after his Continental Airlines flight slid off the runway and burst into flames in Denver late last year.

"We were in the middle of a normal takeoff when we suddenly veered off," he reported. Then he posted a picture of the crash. Then he tweeted that Continental kept the survivors "locked up" in its lounge until it could sort everything out. "Won't even serve us drinks," he added.

So what? "The world will never be the same," says Joel Comm, author of the book "Twitter Power: How to Dominate Your Market One Tweet at a Time." The airline crashes marked a turning point for this emerging technology, according to Comm and other social media experts. Once the domain of a few early adopters, microblogging is now being embraced by the masses. It could change the way we travel.

"The viral nature of interesting posts expand your reach and influence," says Comm.

He's right. Seven out of 10 Twitter users joined just last year, according to the latest HubSpot "State of the Twittersphere" report. Somewhere between 5,000 and 10,000 Twitter accounts are opened every day. Most microbloggers have a small circle of friends -- fewer than 30 -- with whom they share their day-to-day thoughts. But as microblogging grows, so will the power and influence of these Twitterers, who blast dispatches not to exceed 140 characters to their network of "followers."

Microblogging could enlighten and empower travelers, who used to be at the mercy of their airline, car-rental company or hotel. Imagine you're Continental, and a plane-crash survivor has accused you of keeping him prisoner. What if your vast social network finds out about the bedbugs in your hotel room the moment you check in? Or your friends discover the silly surcharges on your rental vehicle before the car-rental firm's customer service department has any inkling? Wouldn't that change everything?

So how do you become a part of this microblogging movement? Here are eight tips from the experts.

An account on Twitter or Brightkite is completely free. You can find out which of your friends are using the service by importing your contacts and then inviting them to join your network. (I'm on Twitter at elliottdotorg) The best way to learn how to microblog is to jump in and figure it out by watching others do it. "Build up a group of followers and communicate with them," says Tom Johansmeyer, a blogger for Gadling.com. "Then, when you're on the road, there will be people reading, commenting and participating."

Blogger Beth Ziesenis says it isn't necessarily the size of the network that matters, as much as who is a part of it. Nothing can improve your next trip like having the right friends. She recently caught wind of a flight delay long before her airline told her, thanks to a circle of well-traveled online contacts. These influencers "twitter happily from empty airports as they sail through security lines, or they'll share their real-time experiences with traveling hassles," she told me.

"You'll gain a world of insight on safe and hassle-free travel by listening to those who do it the most." Where are these powerful microbloggers? I recently profiled them on my blog or you can find a list of the top Twitter users by category at the Shorty Awards site.

Take it with you

Part of what makes microblogging so compelling is that it's everywhere -- not just accessible from your computer at home or work. If you only twitter while you're at home, you'll miss half the fun. "Make sure to use the service from your mobile device so you can get tips while on the go," says Isaac Kelly, who created an application called My Twitter Notebook that allows you to take notes through Twitter. I have two free applications -- Twitterific and Twittelator -- installed on my iPhone.

No one is interested in navel-gazing -- at least not when you're building a community of travelers. Interesting brings new followers to your network. For example, travel blogger Pam Mandel added to her list of followers when she microblogged a scary emergency landing last year. She also blogged about it on her site. "I believe I have the dubious honor of being the first to tweet a plane 'crash,'" she told me. "I hope it's not my 15 minutes."

There are any number of tools and applications -- from Twitter's search function to Tweetlater -- that allow you to keep a finger on the pulse of the so-called Twittersphere. "It lets you see what people are saying about where you're visiting, where you're staying and what you're eating ahead of time," says Amanda Blum, a social media instructor who publishes the site Are You Socially Acceptable.

I use an application for Twittering called TweetDeck that shows which trends are "hot" at the moment. You can join the conversation by adding a hash mark to a keyword in the conversation. (For example, if it were about travel, you'd type a hash mark and then the word travel in your entry.)

Most travel companies have Twitter accounts that are monitored regularly. Those include Southwest Airlines, Marriott International and Virgin America. For now, this may be one of the most direct ways of communicating with a company. Take advantage of it. Maria Bailey did. The author of the book "Mom 3.0: Marketing with Today's Mothers by Leveraging New Media and Technology" was caught in a snowstorm last month, so she sent a direct message to her airline, JetBlue. "I got a response within minutes and knew to avoid Kennedy Airport," she says.

You'll get out of microblogging what you put into it, say pros. "Share wonderful experiences, like guides, great local events, walks and hikes," says travel blogger Kathy Dragon. "And publish photos." What makes microblogging content so special is that it's completely unique, she says. So don't regurgitate guidebook content, but include your own insights and opinions. You'll be rewarded with the unique insights of other members of your network the next time you're on the road.

Some microblogging content is more of a lecture than a conversation. That doesn't necessarily make it boring. For example, Oregon's Twitter site offers tips on everything from the best happy hour spots in Portland to its new sesquicentennial stamp. In San Francisco, the Bay Area Rapid Transit System uses Twitter to communicate information about delays. The U.S. State Department issues travel warnings and even the Transportation Security Administration is on Twitter. "Now you can get short, real-time posts as your journey unfolds," says Andy Renk, a social media expert and blogger.

Still think microblogging is just another fad? Then talk to Chris Guillebeau, who publishes a blog called The Art of Nonconformity. Thanks to Twitter, he's met up with fellow travelers and locals in Egypt, Tunisia, Denmark, Canada and Brunei. And that's just in the last six months.

A Twitter user helped him save $150 on a ticket while he was flying around Southeast Asia. "And in Tunisia, a local family hosted me for a weekend and organized a local bloggers meet up using Twitter," he says

No doubt, now that it's gone mainstream, microblogging is changing travel one tweet at a time.