(CNN) -- Ireland's friendly, helpful locals get high marks from visitors. Add dazzling scenery, rich history and a few hearty pints of stout, and you have a perfect trip to Ireland, according to a handful of iReporters. 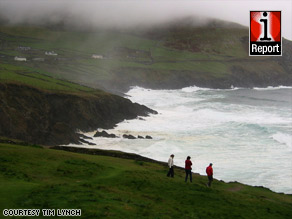 iReporter Tim Lynch took this photo on the Dingle Peninsula.

The country's lush scenery is an obvious crowd-pleaser. Here, iReporters share some of the other elements that made their trips unforgettable.

Tombs at Newgrange and Knowth

Madeleine Grace Hendrick of Charlottesville, Virginia, enjoyed a night of Irish music and dance at a pub in the town of Dingle. "The flute player played faster and faster, stamping out the beat, and the guitar matched it, punching the strings, banging the side of the guitar with his hand.

"Suddenly a man with a black T-shirt jumped up and started clogging. The bar was very crowded, but everyone pressed back to make a circle for him," she wrote. "It was the only time I felt like I saw something that wasn't completely charted out and toured to death."

The dry atmospheric conditions in the vault of this Dublin church have resulted in the mummification of the corpses. Jaclyn Kahn called touring the church "the most amazing thing" she's ever done. "We went on a tour and our zany tour guide brought us down to the crypts underneath the church.

"There we heard the history of the people buried down there, and then we got to shake hands with a 500-year-old mummy for good luck!"