In today's space race, watch out for China 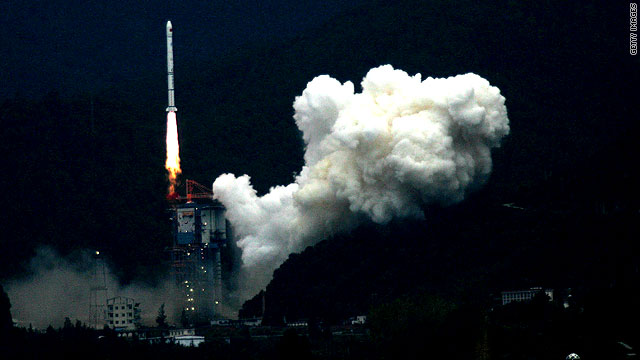 China's first lunar probe blasted off from its launch pad at the Xichang Satellite Launch Center on October 24, 2007.
STORY HIGHLIGHTS

Washington (CNN) -- When China decided to test an anti-satellite missile in 2007, the impact shattered not just the target satellite but any illusions that China did not have military intentions in space and the capabilities to achieve them.

The United States is still ahead in space development, but China has been making impressive progress in expanding its own program -- and it has not gone unnoticed.

"I think anyone who's familiar with the space business, and particularly the history, our history in the space business over the years, would have to be absolutely amazed at the advancements that China has made in such a short period of time," said Gen. Kevin Chilton, head of the U.S. Strategic Command, which is in charge of the military's space operations.

"They certainly are on a fast track to improve their capabilities," Chilton said in early November. "They're to be commended for the achievements that they've done in such a short period of time."

China's intentions in space are a matter of great interest to the United States.

"Where they're heading, I think, is one of the things that a lot of people would like to understand better," Chilton said. He would not speak in detail about any of the discussions between U.S. and Chinese officials.

Any hope for transparency will be tough to come by. China itself may not have a handle on its intentions, said Roger Cliff, a Chinese military analyst at RAND, a global policy think tank. Cliff said there is an internal struggle within the Chinese military for who will control the space mission.

China's president has said its space efforts are "peaceful." But a top Chinese military official spoke of offensive and defensive capabilities in space because "only power could protect peace," Chinese air force Cmdr. Xu Quiliang told the Xinhua news agency.

"It is not clear, and in part the reason for that is because China isn't clear where it is going in space, because they are still arguing it out," Cliff said.

Also, transparency is in the eye of the beholder, Cliff noted. For China, transparency "is a luxury of the superior military power."

What has become increasingly apparent is that China views having a powerful presence in space as crucial to both its military and its commercial interests.

China has launched satellites for communications, reconnaissance and global positioning systems. It is on track to launch more satellites in 2009 than the United States.

It has performed a spacewalk and aims to land a rover on the moon in 2012 and place a manned space station in orbit by 2020, according to a Defense Department report to Congress about China's military capabilities. It also is testing the Long March V Rocket, the world's largest, to lift heavy payloads into space and double its current capabilities.

China is also developing microsatellites that weigh less than 100 kilograms.

There is tremendous excitement in China about the space program. [In America] a shuttle goes up and everyone yawns.
--David Finklestein
RELATED TOPICS

China has the ability to conduct some space military operations. As it showed in 2007, the country can attack low orbiting satellites.

China is also developing more advanced weapons like "lasers, high-powered microwave, and particle beam" capabilities to interfere with satellites and is developing its ability to track and identify satellites, "a prerequisite for effective, precise counterspace operations," the Defense Department report concluded.

"China views the development of space and counterspace capabilities as bolstering national prestige and, like nuclear weapons, demonstrating the attributes of a great power," the report explained.

The country is also thinking about "co-orbital" anti-satellite systems, Cliff said. The intent is to have a satellite that can catch up to and destroy or jam another satellite.

China's push into space is part of its efforts in the "global commons" of space, maritime and cyberspace, explained David Finklestein, director of China studies at CNA, a nonprofit research organization. Finklestein said the country is aggressive in expanding not just in space but also in cyberspace and at sea, areas not controlled by any specific country.

The United States and China have had confrontations at sea and in cyberspace. Chinese ships have harassed U.S. naval ships in international waters, and the United States has accused China of trying to hack into government computers.

"When you consider that they have taken the old Gemini and Apollo programs and leapfrogged and condensed that into the last decade or so, it is impressive," Finklestein said. "Outer space, like the high seas, is incredibly important global commons where the Chinese and other nations need to work to find common ways to avoid problems."

Space, to the Chinese, is a matter of national prestige.

But for all its advances, China has come to realize that it must demonstrate it's a responsible global citizen. Cliff said the 2007 anti-satellite test also showed China that progress comes with risks.

The international outcry that followed put China on the defensive. The resulting debris field in orbit was potentially harmful as well.

"Smashing things in space and creating debris, your own satellites can suffer damage as well," Cliff said. That's why China is working to develop other anti-satellite capabilities, "realizing it is better not to smash things up in space and develop debris fields that last hundreds of years," he added.