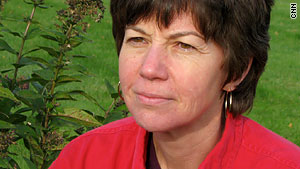 Catherine "Cady" Coleman is juggling motherhood and her job as a NASA astronaut.

Editor's note: This is the first in a yearlong CNN series, "Counting Down Cady," that follows NASA astronaut and mother Catherine "Cady" Coleman as she prepares for a November 2010 trip to the international space station. Watch the first "Counting Down Cady" TV segment Monday mornings on CNN's "American Morning." Follow her story on the AMFix blog.

Shelburne Falls, Massachusetts (CNN) -- At her home in this woodsy town east of the Berkshires, Catherine "Cady" Coleman often steps outside with her husband and son to peer at the night sky.

But they're not just stargazing. They look up to catch a glimpse of the international space station as it passes 250 miles overhead.

"We watch it together," Coleman adds wistfully. " I like to think about that fact that [son] Jamey and [husband] Josh might do that when I'm up there."

That's right. A year from now, if everything goes according to plan, Coleman will blast off on a Russian Soyuz rocket for the station, where she will live for the next six months.

It's a tricky balancing act. One day Coleman is cooking dinner and picking up Jamey's toys; the next, she's a NASA astronaut in Houston, Texas, preparing to orbit the Earth at 17,000 miles per hour.

Taking on this mission to space, Coleman says, was a family decision.

"To decide to go and fly on the space station is basically a five-year commitment for me to stay down in Houston, and not live in the same place as these guys," she tells CNN.

Blog: Coleman talks about her life in her own words.

The Johnson Space Center in Houston is a long way from the family home in western Massachusetts, where Coleman's husband Josh Simpson is an established glass artist. This is where Simpson has his glass-blowing studio, and where Jamey, 9, will now live full time after growing up in both Houston and Shelburne Falls.

Coleman's job as an astronaut keeps her away from her family -- she also has a stepson, Josiah Simpson -- for long stretches. But they seem to understand.

"It is important to Cady. This is what she lives for," Simpson says. "Jamey and I want to support her in any possible way that we can, because she's just fantastic.

I want to live on the space station, and I don't really care how I get there.
--Cady Coleman

Coleman, 48, insists she is no different than other working moms. But few working moms have the opportunity to take three trips to outer space. Coleman's first mission was on space shuttle Columbia in 1995. During that trip Coleman traveled around the world more than 250 times.

An expert on long-term space livability issues, Coleman returned to space again on space shuttle Columbia in 1999. During that five-day trip, she was the lead mission specialist for deploying the Chandra X-Ray Observatory, an orbiting telescope.

Coleman has logged more than 500 hours in space, which sounds like a lot until you consider she'll be on the space station for more than 4,000 hours.

Her third trip to space will be different. Coleman will not be blasting off in a NASA shuttle but on a Russian spacecraft. Since NASA is retiring its shuttle program in September 2010, American astronauts hitching rides with the Russians may soon become a regular occurrence.

This is fine with Coleman. "I want to live on the space station," she says, "and I don't really care how I get there."

The current plan will leave the American space program without a manned space vehicle until at least 2015, when the next-generation Ares rocket will be ready to launch.

During the next year Coleman's training will intensify. She will be spending a lot of time training overseas with her crewmates, Russian cosmonaut Dmitri Kondratyev and Italian astronaut Paolo Nespoli. Coleman's travels will take her to Russia to learn about the Soyuz Rocket and to Europe and Japan to learn about different space station modules.

"It's a magical place," says Coleman of outer space. She realizes she's lucky to be able to journey multiple times into orbit when only an exclusive group of people even get to go once.

Coleman says she'll miss her family in Massachusetts while she's in space. But she can take comfort in knowing that as she flies across the heavens in her orbiting home away from home, they'll be watching.