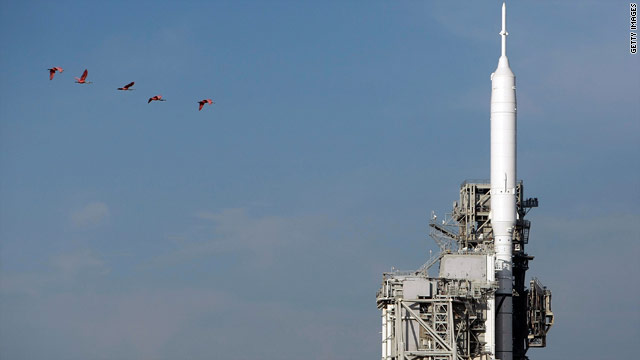 (CNN) -- For the first time in decades, a rocket instead of a space shuttle is occupying launchpad 39-B at the Kennedy Space Center in Florida.

The Ares 1-X is a thin, sleek, 327-foot test rocket that is scheduled to launch Tuesday between 8 a.m. and noon. It is a test that could be influential in determining NASA's next-generation space vehicle.

Although NASA is billing this test launch as "the first flight of a new era," the future of the space program is under review by the Obama administration.

The Constellation Program, of which Ares 1-X is a part, has been developing new vehicles that would replace the space shuttle. The last space shuttle is scheduled to fly in September 2010.

If the Constellation Program moves forward, the Orion capsule atop the Ares rocket will not be ready to take astronauts into space until at least 2015, leaving a gap of at least five years in which the only way the United States would be able to put humans in orbit would be by hitching a ride with the Russians.

While the Obama administration contemplates the future, work under the Constellation Program has continued.

"It behooves us to build an architecture that can serve a multitude of missions for the next 50 years," NASA scientist Dave Leckrone said.

The vehicles under Constellation are being designed not only to ferry astronauts to the international space station, but also to the moon and Mars. The Ares 1-X test is the first time NASA will be able to check the stability, controllability and safety of the Ares 1 design.

If the test flight goes as planned, the rocket will separate into two parts a couple minutes after liftoff, at about 130,000 feet. The lower part of the rocket, referred to as first stage, is where a four-segment solid rocket booster is located. The Ares booster is a modified version of the one used to launch the space shuttle.

The top of the rocket, known as the upper stage, includes a mock Orion crew capsule and a launch abort system.

The upper stage will continue up until gravity causes its return to earth and fall into the Atlantic Ocean.

The first stage's solid rocket booster is reusable, and it should leisurely return to earth via parachutes as soon as separation occurs.

"Unlike earlier programs, Constellation will directly inherit the legacies of both Apollo and Space Shuttle," a NASA fact sheet reads, "using parts and concepts of these earlier programs to build more dependable and economical craft."

Whether Constellation is economical enough to continue is up in the air. In the meantime, NASA's immediate concern is getting the Ares 1-X test rocket off the ground.