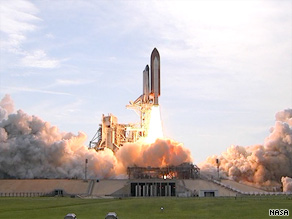 The shuttle took off at 6:03 p.m. Wednesday night after being scrubbed five times before.

"The weather is cooperating, and it's now time to fly," Launch Director Pete Nickolenko announced.

Weather delayed the shuttle's launch Monday. The postponement was the third in three days because of weather and the fifth since mid-June.

Storm cells with lightning were within 20 nautical miles of the launch area, NASA said. Hydrogen leaks led to the delays in June.

On Sunday, lightning and cumulus clouds violated launch guidelines and sent astronauts back to their quarters for the night.

Cumulus clouds are tied to volatile weather such as lightning and tornadoes.

On Friday, 11 lightning strikes hit within a half-mile of the launch pad, scratching Saturday's launch.

The Kibo science lab, also called the Japanese Experiment Module, is Japan's first human space facility, and has been more than 20 years in the making.

Five spacewalks are planned for the crew after the shuttle docks. But because of the launch delays, Endeavour would have to undock early because of the planned arrival of the Russian resupply ship Progress, launch integration manager Mike Moses said Monday evening.

No mission tasks would be removed to account for Endeavour's early undocking. But some tasks -- such as stowing and repacking things aboard the shuttle -- would be done after undocking instead of before, Moses said.

"That will let us basically undock in time for Progress to come [and] keep our full 16-day mission," he said.