(CNN) -- NASA has rescheduled the launch of space shuttle Endeavour for 5:40 a.m. ET Wednesday, pushing back the planned launch of a separate lunar mission. 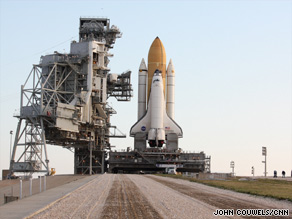 The shuttle had been set to launch Saturday, but a gaseous hydrogen leak forced postponement.

The leak, detected during fueling of the shuttle Saturday morning, was in the gaseous hydrogen venting system outside the shuttle's external fuel tank, the space agency said. The system is used to carry excess hydrogen safely away from the launch pad.

The seal around the system had to be replaced.

Launch of the rocket carrying the Lunar Reconnaissance Orbiter and the Lunar Crater Observation and Sensing Satellite, which was to be Wednesday, will be pushed back to at least Thursday. NASA, however, said its launch is more likely to be Friday, because Thursday would be too tight a turnaround after the shuttle launch.

Five spacewalks are planned for the crew after the shuttle docks.

The Kibo science lab, also called the Japanese Experiment Module, is Japan's first human space facility, more than 20 years in the making. The bus-sized, 32,000-pound (14,500-kilogram) module will be the largest lab at the space station.

The Endeavor is carrying a platform that is to be attached to the outside of the unit to allow experiments to be exposed to space.