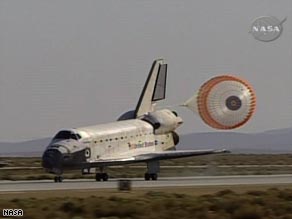 The space shuttle Atlantis touches down at Edwards AFB on Sunday.

The shuttle touched down at 8:39 a.m. PT at Edwards, about 100 miles north of Los Angeles, California.

Within seven to 10 days, the shuttle will be transported from California to Florida on the back of a modified 747 jumbo jet, NASA said in a statement. Atlantis' next flight is scheduled for November.

Rainy weather postponed the shuttle landing both Friday and Saturday. NASA had said that Atlantis conceivably could have remained in space until Monday, but wanted to land the shuttle Sunday.

Weather conditions in Florida were better Sunday than Saturday, NASA officials said, but atmospheric conditions were still too unstable for a landing at Kennedy.

It was the 53rd time the shuttle has landed at Edwards, NASA officials said. In the early days of the space shuttle program, Edwards was its primary landing site. Shuttles have landed 70 times at Kennedy Space Center, NASA said, and once at White Sands Space Harbor in New Mexico.

Atlantis launched May 11 for NASA's final repair visit to the Hubble Space Telescope. Shuttle astronauts conducted five spacewalks during the mission to perform routine repairs and replace key instruments, in what has been called one of the most ambitious space repair efforts ever attempted.

The telescope was rejuvenated with instruments designed to improve its capabilities by as much as 70 times, while extending its lifetime through at least 2014, according to the NASA statement.

"This is not the end of the story but the beginning of another chapter of discovery by Hubble," Ed Weiler, associate administrator for science at NASA headquarters, said in the statement. "Hubble will be more powerful than ever, continue to surprise, enlighten and inspire us all, and pave the way for the next generation of observatories."

Hubble, which has been in space for nearly two decades, can capture clear images that telescopes on Earth cannot, partly because it does not have to gaze through murky atmospheres.

CNN's John Couwels and Alan Duke contributed to this report.