(CNN) -- Final preparations are under way for Monday's scheduled launch of the space shuttle Atlantis from Kennedy Space Center in Florida in a repair mission for the Hubble Space Telescope. 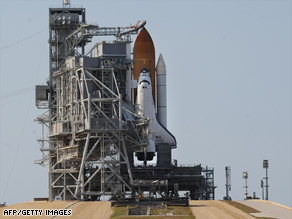 The space shuttle Atlantis is prepared for launch Sunday at the Kennedy Space Center in Florida.

The countdown timeline is on target, and "Atlantis is ready to fly," said Charlie Blackwell-Thompson, NASA's test director.

Preparations for the 2:01 p.m. ET flight will continue throughout the day. The forecast is favorable, according to the shuttle's weather officer, Kathy Winters, who said there's a 90 percent chance the weather will cooperate.

Monday is the first of three possible launch days for the shuttle and its seven-member crew this week. The launch window is open through Wednesday.

The much-delayed Atlantis mission is to repair and upgrade the Hubble. The 11-day mission will include five spacewalks to refurbish Hubble with state-of-the-art science instruments. After the upgrades, the telescope's capabilities will be expanded, and its lifetime extended through at least 2014.

Watch how the pressure on the Atlantis crew is immense »

The original May 2008 launch date to repair the space telescope was pushed back to October for various reasons and then delayed again after the failure of a major science instrument.

"We're all very excited to see the telescope again. We haven't seen it in seven years," Tony Ceccacci, NASA's lead flight director, said in April, referring to the last time Hubble was serviced.

"It will never have been better, and it's at the apex of its operations."

This mission will be the last time that a second shuttle -- in this case, the Endeavour -- will sit on a launch pad ready to rescue a mission's crew in case of an emergency. On missions to the international space station, the station itself serves as the emergency backup. A mission to Hubble will put the shuttle in a different orbit, preventing access to the space station.

A rescue shuttle has been prepared for such a mission since wing damage at liftoff led to the loss of the Columbia and its crew in February 2003.

Endeavour could lift off in seven days if needed, administrators said.

The decades-old shuttle program is nearing its end. With nine missions left, shuttle flights are scheduled to wrap up next year, though technical or weather delays could push the final mission into 2011.

If nothing changes, NASA has all the resources necessary to complete the scheduled missions, Leroy Cain, deputy manager of the shuttle program, said in April.

NASA wants to finish its commitment to aging shuttles so it can ramp up development of a new generation of manned spacecraft.

This visit will be the fifth and final repair mission for Hubble, which has been in service for 19 years.

After the Columbia disaster, then-NASA Administrator Sean O'Keefe said no further repair mission would be flown because of the risk. A new administrator, Michael Griffin, reversed that decision in 2006.