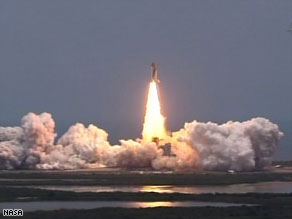 Space shuttle Atlantis launched successfully from Florida Monday on its way to the Hubble telescope.

The spacecraft rocketed into mostly sunny skies right on schedule at 2:01 p.m. ET.

Atlantis will spend five days upgrading the Hubble, the orbiting observatory that's been scanning the universe for almost two decades.

For the seven members of the shuttle crew, that means added pressure.

"I think [this] is motivating us because we know there's nobody coming after us to do anything we don't get done," said Atlantis Commander Scott Altman. "This is it. We either get it done or it doesn't happen."

It's been seven years since NASA's last Hubble servicing mission in 2002, and the space telescope was designed to go only about three years between fixes. iReport.com: Share photos, video of the launch

NASA canceled an Atlantis mission to extend Hubble's operational life in January 2004 because the trip was considered too risky in the wake of the 2003 Columbia tragedy that killed seven astronauts. But public pressure and the development of safer shuttle technology led the U.S. space agency to reconsider.

Still, some risks remain. NASA has estimated there's a 1-in-221 chance the shuttle could be struck by orbiting space debris from past missions. Thousands of objects hurtle through the heavens, some as large as several feet in diameter, and the Hubble's orbit is more crowded with space junk than that of the international space station, which orbits at a lower altitude, NASA said.

While the Atlantis's shields would likely deflect a small piece of debris, a larger object could cripple the spacecraft, NASA said. Space shuttle Endeavour is on standby in the unlikely event that NASA will need to rescue the Atlantis crew members during their 11-day mission.

During five grueling space walks some 350 miles up in space, a pair of two-man teams from the Atlantis will work on the Hubble inside Atlantis' cargo bay.

"This is going to be [like] running a marathon at a sprint pace," said Mission Specialist John Grunsfeld.

Grunsfeld and fellow Mission Specialists Drew Feustel, Mike Good and Mike Massimino will change out gyroscopes, batteries and cameras on the Hubble. Grunsfeld and Feustel will handle the first 6 1/2-hour space walk, or extravehicular activity, performing what Grunsfeld calls "surgery" on the Hubble. iReport.com: Share photos, video and tell us what this event means to you

The two men will change out Hubble's wide-field camera and a module that allows the telescope's science instruments to be commanded from the ground. The module failed just before Atlantis was supposed to launch last October. NASA delayed the mission until now so that scientists could work out the fix.

During another space walk, Grunsfeld and Feustel will repair another camera and install a new spectrograph. The work involves removing dozens of tiny bolts and replacing old circuit cards with new ones.

"It all has to line up just right so that I can go in the telescope and do all this work," Grunsfeld said. "We only have that one day to finish it."

The wonderful thing about the Hubble, said former astronaut Jeff Hoffman, is that when crews service the telescope it's not just a repair -- they leave it better.

"Every time we come from a Hubble mission, Hubble is essentially a new telescope -- much more powerful," said Hoffman, a professor at the Massachusetts Institute of Technology who flew on the first Hubble repair mission in 1993.

"And when this crew finishes with it, it's going to be. . .like a thousand times more sensitive [for making new discoveries] than it was when it was first put in orbit, and that's incredible," he said.

Astronomers and cosmologists credit the Hubble with changing humans' understanding of the universe. The telescope, orbiting beyond the obscuring layer of the Earth's atmosphere, has helped determine the age of the universe while sending back astounding images of galaxies in all shapes and sizes.

"The discovery that essentially as far as we can tell all galaxies have black holes -- large, super massive black holes at their centers -- is something people have speculated on," Hoffman said. "But Hubble has given us data actually to confirm that."

Perhaps Hubble's greatest discovery has been opening scientists' eyes to what they don't yet know. And there's a lot of it.

"We discovered in fact that all that stuff we thought we knew about accounts for only 4 percent of the known universe," Grunsfeld said. "Most of the universe is made up of what's called 'dark energy.' Nobody could have anticipated it. It's the largest constituent of the universe. We still have no idea what it is."

But back in 1990, shortly after the telescope's launch, no one could think about great discoveries. Hubble was considered a disaster.

The telescope's primary mirror was flawed. Its shape was off by about 1/50th the thickness of a sheet of paper -- just enough to blur the images.

"There was a time when Hubble was a laughing stock," Hoffman said. "You know, the 'techno turkey.' Pictures in editorial cartoons, denounced on the floors of Congress, ridiculed in late-night television programs."

In December of 1993, astronauts on board the Shuttle Endeavour went on the first Hubble repair mission. They fixed the telescope's blurry vision. A month later, Hubble began sending back the first of hundreds of thousands of crisp, spectacular images.

Hoffman calls Hubble, "the people's telescope." Grunsfeld, who has made two repair trips to the Hubble, said that leaving it this time will be like saying a final goodbye to an old friend.

"Regardless of my intellectual knowledge that this is a satellite and it's a satellite that people created and has electronics in it and optics and it does its job," he said, "it's impossible not give it some human characteristics and feel sadness when we see it floating away."