WASHINGTON (CNN) -- It looked as if a spaceship had landed on the National Mall on Monday as NASA showed off a mockup of its new Orion crew module. 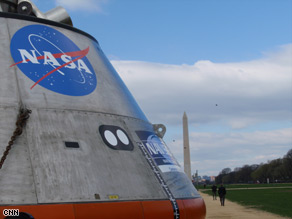 NASA displayed a mockup of its Orion crew module on the National Mall on Monday.

Before the next U.S. astronauts go to the moon -- and maybe eventually to Mars -- NASA scientists want to make sure they can return safely. So NASA is testing how best to evacuate its crews from a capsule that has returned to Earth.

In April, it will take a mockup of the spaceship Orion to Florida to see how well it handles in the ocean.

On the way to the Kennedy Space Center, there was a stop at the National Mall in Washington for tourists and reporters to see the 18,000-pound, stainless-steel ship.

Mounted on a trailer in front of the Smithsonian's Air and Space Museum, where other generations of spacecraft are on display, the module looked a lot like the Apollo spacecraft of the 1960s, but larger. The newer version can carry six astronauts rather than the three possible inside an Apollo module.

NASA Project Manager Dan Pearson said scientists applied many of the same principles as Apollo in hopes of keeping costs down.

"People look at this, and they say, 'Wow, that looks a lot like Apollo.' Well, that's done on purpose," Pearson said. "They had some great designs and analysis back then, and we've looked at those things. We've decided, 'Hey, let's reuse a lot of that.' "

On the inside, there will be major upgrades to the module's technology, which has come a long way since the late 1960s.

"We are completely changing the avionics," Pearson said.

Six days from now, scientists expect to have the Orion mockup module in the ocean off the coast of Florida to study how it moves in the water. The information will be fed to flight doctors in Houston, Texas, who will analyze the data over the summer to figure out what would happen to a crew after the module splashed down in the ocean.

Also this summer, NASA expects to have astronauts practice getting out out of the water-bound module. They have to account for possible rough seas and astronauts who are feeling gravity for the first time in a while and likely to be seasick.

Orion is part of the Constellation Project, which will replace NASA's space shuttle program, being retired at the end of 2010.