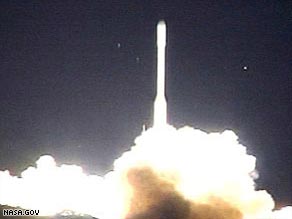 NASA launches a rocket from California's Vandenberg Air Force Base on Tuesday.

"We could not make orbit," NASA program manager John Brunschwyler said. "Initial indications are the vehicle did not have enough [force] to reach orbit and landed just short of Antarctica in the ocean."

"Certainly for the science community, it's a huge disappointment."

The satellite, which would have monitored greenhouse gases to study how they affect the Earth's climate, was launched on a Taurus XL rocket from Vandenberg Air Force Base in California at 1:55 a.m. PT (4:55 a.m. ET).

But the payload fairing -- a clamshell-shaped structure that allows the satellite to travel through space -- failed to separate from the rocket, NASA officials said.

The weight of the fairing caused the rocket and the satellite to come crashing down to Earth about three minutes later.

A team of investigators will look into what caused the payload fairing to fail to separate.

"We'll get back to flying at a pace that allows us to do so successfully," said Chuck Dovale, NASA Launch Director, at a press briefing after the failed launch.

The $273 million satellite, called the Orbiting Carbon Observatory, would have collected global measurements of carbon dioxide (CO2) in the Earth's atmosphere to help better forecast changes in carbon-dioxide levels and their effect on the Earth's climate.

Carbon dioxide is considered a greenhouse gas because it traps heat, which scientists believe contributes to the warming of the planet. Carbon dioxide also absorbs wavelengths of light, and the NASA observatory would have measured levels of the gas partly by using instruments to analyze light reflected off the Earth.

The OCO also would have provided information about CO2 "sinks" -- areas, like oceans or landfills, that absorb and store carbon dioxide. NASA officials said all measurements would be combined with the findings of ground observation stations, providing a more complete account of the human and natural sources of CO2.

The OCO project took eight years to develop, said Michael Frelich, director of the NASA Earth Science Division. Its failure is a great loss for the science community, he said.