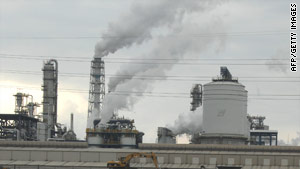 London, England (CNN) -- On Tuesday November 17, a substantial file including over 1,000 e-mails either sent from or sent to members of the Climatic Research Unit (CRU) at the University of East Anglia in eastern England were allegedly hacked and leaked onto the Internet.

As a result of the "leak," the head of the CRU, Professor Phil Jones, said he would step down from the post, while a review is carried out into claims of data tampering.

How important is this data?

The CRU is one of the world's leading research bodies on natural and human-induced climate change and has developed a number of the data sets widely used in climate research, including the global temperature record used to monitor the state of the climate system.

It played a key role in the Intergovernmental Panel on Climate Change's (IPCC) Fourth Assessment Report in 2007 -- a collaboration between the United Nations Environment Program and World Meteorological Organization (WMO) -- considered to be the most authoritative report of its kind.

How was this data allegedly manipulated?

One particular e-mail involving Professor Jones relates to the preparation of a figure for the WMO Statement on the Status of the Global Climate in 1999. He writes, "I've just completed 'Mike's Nature trick' of adding in the real temps to each series for the last 20 years ... to hide the decline."

According to critics, this "trick" worked in the following way: when temperature readings taken from tree rings showed an apparent decline in temperatures from the 1980s to the present, the researchers added in measurements taken later by more modern instruments, which gave them the answer they wanted.

What does the CRU say?

In a statement on the university's Web site, the CRU said the use of the word "trick" was not intended to imply a deception. It said: "The requirement for the WMO Statement was for up-to-date evidence showing how temperatures may have changed over the last 1,000 years.

The statement goes on to say the illegally obtained e-mails have been "taken out of context and misinterpreted" as evidence that CRU manipulated climate data to present an unrealistic picture of global warming.

It adds that "this conclusion is entirely unfounded and the evidence from CRU research is entirely consistent with independent evidence assembled by various research groups around the world."

The CRU maintains "there is excellent agreement on the course of temperature change since 1881 between the data set that we contribute to and two other, independent analyses of worldwide temperature measurements," carried out in the U.S. by the National Oceanographic and Atmospheric Administration (NOAA) and NASA.

How seriously is this leak being taken?

Many climate change experts claim the files were stolen in an attempt to undermine the Copenhagen talks. "Given the wide-ranging nature of change that is likely to be taken in hand, some naturally find it inconvenient to accept its inevitability," IPCC chairman Rajendra Pachauri told reporters in the Danish capital Monday.

"The recent incident of stealing the e-mails of scientists at the University of East Anglia shows that some would go to the extent of carrying out illegal acts, perhaps in an attempt to discredit the IPCC."

Climategate has also caused a storm in the United States. During a Congressional hearing on global warming, Rep. James Sensenbrenner of Wisconsin said the e-mails in question "poked a hole in the conclusion that the question of human influence on climate change is settled." The Republican said the e-mails "read more like scientific fascism than scientific process."

However Senator Ed Markey, a Democrat from Massachusetts, called the focus on the e-mails a distraction from the "catastrophic threat to our planet."

Is this likely to influence talks in Copenhagen?

Jonathan Pershing, the Deputy U.S. Special Envoy for Climate Change, told a new conference in Copenhagen Monday that the e-mails would have no effect. "My sense is that the large volumes of data released since the story broke supports the incredibly robust science behind the research," he said.

"The tragedy is that scientists who have dedicated their lives to this cause are now being pilloried."

What's at stake in Copenhagen?

Nicholas Stern, author of the UK's 2006 Stern Report on the economics of climate change, insisted the evidence of climate change was "overwhelming." He said it was important that all views were heard but was critical of many skeptics arguments which he claimed were "muddled and confused."

Mitchell urged people who had become skeptical since the publication of the CRU e-mails to look at the evidence rather than "a selective take on e-mails which were stolen."