By Elaine Quijano and Eric Marrapodi 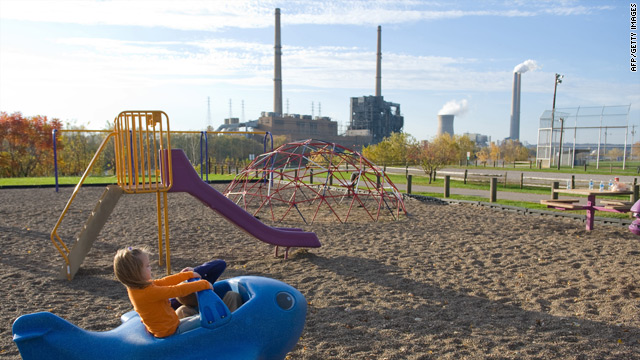 New Haven, West Virginia (CNN) -- Nestled in the heart of American coal country, on the banks of the Ohio River, an expensive, high-stakes experiment is under way -- one that could fundamentally alter the way the world manages carbon emissions.

At first glance, American Electric Power's Mountaineer plant looks like its traditional coal-fire counterparts. But the newest area of the plant, a towering five-story, multi-million dollar structure that began operating this fall, makes this facility one-of-a-kind.

It's the world's first-ever, coal-fire power plant to capture and store some of the carbon dioxide that would otherwise be released into the atmosphere as a heat-trapping pollutant.

Brian Sherrick, who manages the project for American Electric Power, explains: "We take that CO2, then inject it into the ground into one of two injection reservoirs."

Sherrick says the West Virginia plant has received worldwide attention, especially as countries like China and India grapple with pollution from coal as well.

"We want to see how well the process works, what energy demand it requires with electricity and steam," Sherrick said.

The project is an expensive partnership between plant owner American Electric Power and French company Alstom. Together, the two companies are spending more than $100 million to capture just a tiny fraction of the plant's carbon emissions -- under two percent.

The goal? To see if the technology can be ramped up for wide-scale commercial use.

Video: From peanut shells to energy

The new technology is called carbon capture and sequestration.

Through a complex chemical process, carbon dioxide, or CO2, is captured from a power plant's emissions. That carbon dioxide is then compressed, liquified and injected thousands of feet underground into porous rock. Experts say the CO2 is kept in place by a layer of less-porous rock above.

But questions remain about the cost and safety of the process. Scientists like energy professor Kelly Simms Gallagher of Tufts University say experiments like the Mountaineer project are critical.

"It's still quite expensive... and we need to be doing many more demonstrations of the carbon storage part of the equation to gain confidence about our ability to store that C02 underground safely and permanently," Simms Gallagher says.

In the shadow of the plant, just across the river in Ohio, local resident Elisa Young worries about safety.

"Let's face it, this is an experiment. The nature of an experiment is that you do not know what will happen," she says.

Young is concerned about carbon dioxide injections triggering seismic activity or leaking out of the reservoirs.

"I'm sorry, but no scientist in the world can convince me that there is not a 50-50 chance it's going to go in this direction," Young says.

American Electric Power maintains it is taking proper safety precautions, including drilling wells around the injection sites to monitor groundwater and keep track of where the carbon dioxide goes.

Carr believes if done properly and in the right location, underground rock formations can store carbon dioxide safely. He notes that CO2 injections have been used for decades to help extract oil and gas from the earth. He sees carbon capture and storage as a way of speeding up what the planet would do eventually.

At the Mountaineer plant, the experimental project is getting a big boost.

The U.S. Department of Energy has announced $334 million in stimulus money over the next 10 years for American Electric Power to expand its carbon capture and storage operation.

"Every dollar that they throw down that pit and cap off is a dollar that's kept from real research and development for renewable energy," she says.

Company officials say they are also investing in renewable energy -- but that putting that infrastructure into place will take time.

Some experts say because coal remains a cheap, abundant source of energy for the world, retrofitting or building new plants with carbon capture and storage technology could one day prove essential to slowing climate change.

"We will need carbon dioxide in storage if it turns out to be a viable technology."