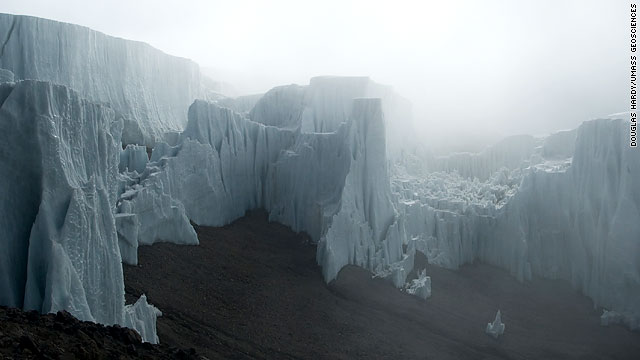 (CNN) -- The ice and snow that cap majestic Mount Kilimanjaro in Tanzania are vanishing before our eyes.

If current conditions persist, climate change experts say, Kilimanjaro's world-renowned glaciers, which have covered Africa's highest peak for centuries, will be gone within the next two decades.

"In a very real sense, these glaciers are being decapitated from the surface down," said Lonnie Thompson, professor of earth sciences at Ohio State University. Thompson is co-author of a study on Kilimanjaro published Monday in the journal Proceedings of the National Academy of Sciences.

The study's authors blame the disappearing ice on increases in global temperatures and diminished snowfall at Kilimanjaro's summit.

Previous studies of Kilimanjaro's glaciers have relied on aerial photographs to measure the rate of the retreating ice. For this new survey, scientists climbed the mountain and drilled deep into the glaciers to measure the volume of the ice fields atop the 19,331-foot (5,892-meter) peak.

The ice sheet that capped Kilimanjaro in 2007 was 85 percent smaller than the one that covered its plateau in 1912, paleoclimatologists explained in the study.

Thompson and his team of researchers have spent seven years measuring the glaciers of Kilimanjaro, whose snow-capped profile rises dramatically over the surrounding tropical plains.

Using 110 "porters," or local residents, they carried 6 tons of equipment to the mountain's plateau. Battling temperatures as low as 35 degrees below zero, and with very little oxygen, Thompson and his crew lived atop Kilimanjaro for nearly two months, drilling and collecting core ice samples buried thousands of feet below the glaciers' surface.

The new data shows that both the Northern and Southern ice fields atop Kilimanjaro have thinned dramatically in recent years, while the smaller Furtwangler Glacier shrank as much as 50 percent between 2000 and 2009.

As the glaciers break up into smaller pieces, more of the darker surface of the crater is exposed. This causes temperatures to rise on the mountain and accelerates the melting of the ice, scientists say.

"The shrinkage and ultimate disappearance of these glaciers will create tremendous ecological and social problems in the near future," said Doug Hardy, senior research fellow in the Climate Systems Research Center at the University of Massachusetts, Amherst. Hardy contributed research to the new study.

"The Kilimanjaro glaciers are indicators for a larger-scale process," Thompson said. "It's not just Kilimanjaro, it's every tropical glacier in Africa, in the tropical Andes of South America, it's the glaciers in New Guinea. We are losing all those glaciers in today's world."

A snowless Mount Kilimanjaro also could have economic effects.

Kilimanjaro is a tourist attraction and a crucial revenue generator for Tanzania, one of the world's poorest counties. A study published by the Overseas Development Institute in January estimated that 35,000 to 40,000 people visit Kilimanjaro every year, spending almost $50 million annually in the country.