ATLANTA, Georgia (CNN) -- Much of Atlanta is underwater. Highways and neighborhoods have been submerged. Creeks are swollen. Several are dead. 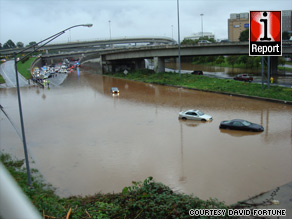 Sounds like the scene from a tropical storm or hurricane, right?

Not this time. Meteorologists told CNN that while the devastation from recent floods in the southeastern city looks like the result of a storm that formed over tropical waters, the floods are actually the result of prolonged and steady rains.

Rains have been drenching the city for about eight days because weather conditions have caused storms to stick in place.

So that, in part, is what has caused the severe flooding -- not torrential rains or high winds, often associated with stronger tropical storms, which form over oceans instead of land.

"This is something that's really impacting a lot of people and scientifically, it's an event that we don't see too often here in Atlanta -- especially when it's not connected to a tropical system," said Laura Griffith, a forecaster with the National Weather Service in Georgia.

"When you're getting hit day after day with a couple inches of rainfall, that's where you start to see problems," she added.

Griffith said a low-pressure storm system moved into Georgia during the middle of last week. When it arrived, it feathered up next to a high-pressure system that was hovering over the East Coast. The result: It got stuck, she said.

CNN meteorologist Jacqui Jeras said the atmosphere over north Georgia is completely saturated with water. A new storm system has moved into place now and, at any disturbance, is ready to drop more water on Atlanta.

"It's just sitting there waiting for someone to wring the washcloth," she said.

Jeras said the storm that remained stuck over Atlanta on Monday previously had brought needed rain to southern Texas. It sucked its moisture from the Gulf of Mexico, she said.

That system dissipated late Monday, but another has moved in to take its place, she said.

Responding to the rain, creeks and rivers in metro Atlanta are overflowing in some places, setting new records. The Chattahoochee River in northeast Atlanta rose to a height not seen since 1919, Griffith said.

Flood warnings have been put in place through Saturday, according to Griffith.

Before the storm stalled over Atlanta, the metro area had been in a prolonged drought. Statewide water-use restrictions were eased in June, but the abrupt shift from extremely dry conditions to prolonged and drenching rains may be contributing to the city's current flood conditions, Griffith said.

The soils became saturated with water over the eight days of rain, meaning the heavy rains seen in Atlanta on Monday had nowhere to go but straight into creeks and drainage ditches, which quickly overflowed.

Jeras, the CNN meteorologist, said the urbanization of Atlanta and its suburban sprawl also contributed to the floods.

Instead of hitting soil, much of the rainwater ran straight into concrete, where it runs very fast and can overwhelm rivers and drainage systems.

"There used to be a lot more earth and soil to help absorb this stuff," she said. "But the rain really fell on the concrete jungle."

All About Floods • National Weather Service