The changing face of the Arctic 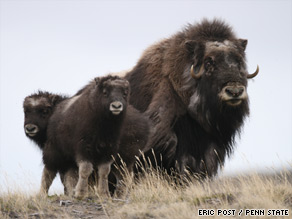 Musk ox in the Arctic check the spread of shrubs to the High Arctic, but promote grass growth.

That's the message from Eric Post, lead scientist of a new report into the effects of climate change on life in the Arctic.

Published in "Science" magazine, Post and his team of international scientist conducted the study during the fourth International Polar Year that ended in 2008.

"It seems no matter where you look -- on the ground, in the air, or in the water -- we're seeing signs of rapid change," said Post in a press statement.

The report found that flora and fauna of the Arctic are responding in various ways to the region's changes in climate over the last 150 years, and more recently the 20 to 30 years where seasonal minimal sea ice coverage has declined by 45,000 square kilometers per year.

With the decline in sea ice and snow, animals usually seen at lower latitudes are being found in more northerly regions, including red foxes that have been displacing native Arctic foxes.

View the gallery of Arctic life affected by climate change »

The report found that some native Arctic species have also benefited from climate change, including wild reindeer on the Norwegian archipelago of Svalbard.

With less snow cover and a longer growing season, these non-migratory reindeer have taken advantage of the increased plant abundance, with the result that reindeer populations and their ability to reproduce are up, while mortality is down.

But other animals are not adapting well to rising temperatures and the effect on delicate ecosystems.

Migratory caribou in low Arctic Greenland and elsewhere are declining in number as they have not been able to keep their calving season in synch with changes in plant growth.

With the decline in caribou comes a knock-on effect to native Inuit hunters, according to the report's authors. Hotter summers could result in more insects and parasites that prey on the caribou, which could then also reduce the annual caribou harvest by local indigenous peoples.

"Inuit hunters at my study site in Greenland have all but given up on hunting caribou there. What will be the next component to disappear from their traditional lifestyle, a lifestyle that has worked for thousands of years?" said Post.

The researchers found that polar bears and ringed seals, both of which give birth in lairs or caves under the snow, lose many newborn pups when the lairs collapse in unusually early spring rains. These species may be headed for extinction, said the report.