(CNN) -- Arctic temperatures in the 1990s reached their warmest level of any decade in at least 2,000 years, new research indicates. 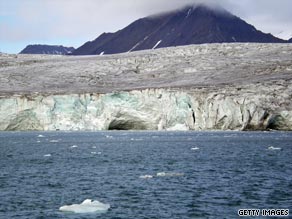 Say hello to warmer temperatures, wave goodbye to ice cover in the Arctic.

The study presents new evidence that the Arctic would be cooling if not for greenhouse gas emissions overpowering natural climate patterns.

The report published in Science magazine found that thousands of years of gradual Arctic cooling, related to natural changes in Earth's orbit, would continue today if not for emissions of carbon dioxide and other greenhouse gases.

"This result is particularly important because the Arctic, perhaps more than any other region on Earth, is facing dramatic impacts from climate change," NCAR scientist David Schneider, one of the co-authors, said in a statement.

"This study provides us with a long-term record that reveals how greenhouse gases from human activities are overwhelming the Arctic's natural climate system."

"Scientists have known for a while that the current period of warming was preceded by a long-term cooling trend," said Kaufman. "But our reconstruction quantifies the cooling with greater certainty than before."

The research team's temperature analysis showed that summer temperatures in the Arctic, in step with the reduced energy from the Sun (related to an approximately 21,000-year cyclical wobble in Earth's tilt relative to the Sun), cooled at an average rate of about 0.2 degrees Celsius per thousand years.

The temperatures eventually bottomed out during the "Little Ice Age," a period of widespread cooling that lasted roughly from the 16th to the mid-19th centuries.

Even though the orbital cycle that produced the cooling continued, it was overwhelmed in the 20th century by human-induced warming. The result was summer temperatures in the Arctic by the year 2000 that were about 1.4 degrees Celsius higher than would have been expected from the continued cyclical cooling alone.

"If it hadn't been for the increase in human-produced greenhouse gases, summer temperatures in the Arctic should have cooled gradually over the last century," said Bette Otto-Bliesner, an NCAR scientist who participated in the study.

The new study follows previous work showing that temperatures over the last century warmed almost three times faster in the Arctic than elsewhere in the Northern Hemisphere.

"Because we know that the processes responsible for past Arctic amplification are still operating, we can anticipate that it will continue into the next century," said Gifford Miller of the University of Colorado at Boulder, a member of the study team.

"Consequently, Arctic warming will continue to exceed temperature increases in the rest of the Northern Hemisphere, resulting in accelerated loss of land ice and an increased rate of sea level rise, with global consequences."