'Green goo' biofuel gets a boost

(CNN) -- Three years ago many would have dismissed the notion that a significant supply of the world's automotive fuel could come from algae. But today the idea, while still an adventurous one, is getting much harder to ignore. 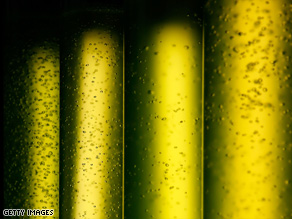 Making green from green: Biofuel from algae has been given a boost in investment in recent years.

Back then there were only a handful of companies seriously focused on producing algae fuel. Now there are well over 50, according to Samhitha Udupa, a research associate with Lux Research.

The number should double within the next year or two, she adds, and private investment in algae fuel ventures has at least doubled every year since 2006, a trend likely to continue.

Last month ExxonMobil-- which has been publicly skeptical of other biofuels in the past -- invested up to $600 million into a collaborative R&D program with Synthetic Genomics, a startup founded by J. Craig Venter.

Venter's previous firm, Celera Genomics, was a key player in sequencing the human genome. Synthetic Genomics is looking at, among other approaches, the use of tweaked metabolic pathways in algae to boost the plant's oil production. The startup received an earlier investment from BP a few years ago, but this one by ExxonMobil has raised eyebrows both for its size and because of the giant's track record.

"ExxonMobil has always been like the grinch that stole clean tech," says Udupa. "And then all of a sudden they're investing a lot of money in this one algae company."

The company kept enthusiasm tempered at a press call last month. "We need to be realistic," said Emil Jacobs, vice president of R&D at the oil giant's research and engineering unit. "This is not going to be easy, and there are no guarantees of success."

But after years of careful research ExxonMobil concluded that algae, among all the alternatives, has the most potential in terms of scalability and fitting into the vast infrastructure of existing refineries and filling stations. (It can also produce far more fuel per acre than palm, sugar cane, or corn.) Other big oil companies have recently invested into algae ventures as well, including Chevron and Royal Dutch Shell.

The airline industry, plagued by high jet-fuel prices, is also investing and testing, with players including Boeing, GE Aviation, Virgin Atlantic, Japan Airlines and Continental Airlines, among others. (Algae fuel has already helped power planes, cars, and other vehicles in various tests and demonstrations.)

Yet the idea isn't new. From 1978, the U.S. Department of Energy's Aquatic Species Program focused on it before closing down in 1996 in the face of persistently low petroleum prices and the relatively high cost of making algae fuel.

Economic competitiveness remains the key challenge, and the hunt is on to find the best strains of algae for producing oil, as some are better than others. But it does appear that algae fuel, once an idea limited to mostly academic circles, will now get the kind of funding and attention that would be needed to turn it into a competitive industry.

A wide variety of approaches are being tried by different ventures to make algae fuel cost competitive -- and it's no easy task.

A startup near San Francisco called Solazyme (whose investors include Chevron) is growing algae in big dark tanks and feeding them sugar. Another in Israel called Seambiotic is growing marine microalgae using smokestack flue gas (or more specifically its carbon dioxide, which algae feed on) from a coal-burning power plant.

Watch how one company in China is pursuing algae power »

NASA and Google have invested in an effort using semi-permeable membrane enclosures of sewage floating in the ocean. Only clean water leaks out, and the algae feed on the nutrients. Other methods range from growing algae in bioreactors to open ponds.

One environmental advantage of algae over other biofuel sources -- like palm for biodiesel, or sugar cane or corn for ethanol -- is it doesn't have to be grown in places that can otherwise serve for food production or endangered species habitat. This helps it skirt the "food vs. fuel" debate.

Algae can be fed sewage and carbon dioxide and grown in many places, including deserts, ponds, and oceans.

But algae fuel is not environmentally perfect. It still creates pollution when burned, like regular fuel. Its marketing as a "green" energy source rankles some environmentalists, who prefer a more profound switch to cleaner options like solar and wind. Algae fuel, they note, requires far less change from Big Oil.

"This is a nice way to say, 'Oh don't worry, you don't have to change anything -- we're just going to make a new way to make the existing system work," says Gillian Madill at Friends of the Earth.

Algae fuel does burn cleaner than fossil fuel, according to J.B. Hunt, a large U.S. trucking company that's looking to go greener. It recently tested a fuel blend containing algae fuel from a California startup called SunEco and found an 82 percent reduction in particulate emissions with no loss of power. The company says it might soon become a significant purchaser.

Huge sales of algae fuel are unlikely, though, over the next few years. ExxonMobil says its project is five or ten years away from producing large quantities of fuel.

And like forgotten startups of the dot-com boom, many ventures of this "algal bloom" will surely not survive. A high-profile one called GreenFuel Technologies -- which took the approach of pumping carbon dioxide into bioreactors -- went out of business this spring after costs and technical problems spun out of control.

But there's another way for algae companies to thrive before the industry scales up to massive fuel production, if it ever does: co-products. These include things that consumers are hardly aware of but that can be higher-value products, like excipients used in pharmaceutical products: Seambiotic make food additives in addition to biofuels; Solazyme has made nutraceuticals, additives and soaps using algae.

"The possibilities are endless," says Udupa. "I think the overall benefits of using algae technology initially will be realized through the co-products."

By contrast, the ethanol industry doesn't have a similarly wide range of fall-back alternatives, she notes. The ethanol industry in the U.S. has long been subsidized by the government, and some lawmakers are fighting to redirect that funding to next-gen biofuels instead.

Meanwhile ExxonMobil seems prepared to spend substantially more on its algae project once certain benchmarks are met. The initial $600 million would help the project get to "a certain level of completion in the work," said Jacobs in the press call last month.

But much more will be needed for final development and early commercialization, he added: "That could amount to, you know, billions of dollars after that."