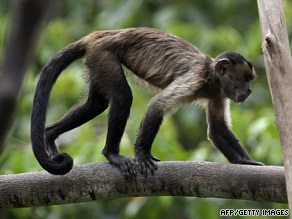 This capuchin monkey lives in the Amazon rain forest of northern Brazil.

Research conducted by the National Institutes of Health in cooperation with two Italian institutions examined how monkeys reacted to two types of humans -- ones who copied their actions and ones who didn't.

"If one person imitates what a monkey does, and the other person does not imitate, the monkey prefers to spend more time in front of the person that imitated them," said Dr. Annika Paukner at the National Institutes of Health offices in Poolesville, Maryland.

Research has shown for some time that humans prefer to interact with others who act like them, and people have a subconscious tendency to imitate others. Paukner told CNN the new study shows it is more than just a human trait.

"It's something that's quite old and something very, very basic. It's not just for us sophisticated humans," she said.

In the study, a capuchin monkey was given a wiffle ball and was allowed to interact with a pair of researchers -- one who, using another ball, attempted to mimic the action of the monkey, and one who deliberately acted in a different way.

Monkeys in the study consistently spent more time interacting with the imitators. They also more readily accepted food and trinkets from the mimicking humans, even when the non-imitators offered the same rewards.

According to the report, the new findings indicate an evolutionary link to the way humans form friendships and create social connections. It also eventually may help people who struggle in social situations, including those suffering from autism.

"Observing how imitation promotes bonding in primates may lead to insights in disorders in which imitation and bonding are impaired," Dr. Duane Alexander of the National Institute of Child Health and Human Development said in a written statement.

Autism spectrum disorders are often marked by an inability to recognize and process social cues that are clear to others.

The National Research Council in Rome and the University of Parma conducted the research along with the National Institutes of Health.

The full report appears in this week's edition of the journal Science.

All About Mammals • Science and Technology • Autism