(CNN) -- One 12-year-old Virginia boy was playing baseball when it happened. 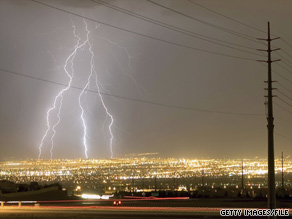 Lightning strikes Las Vegas in 2006. Already this month 11 people have been killed by lightning in the U.S.

The same week, a 33-year-old man was struck while jogging in Texas, a 70-year-old California woman was hit while doing yard work and a Kentucky man, 44, fell victim while waiting under a tree for a ride.

They are among 11 people killed already this month by lightning strikes in the United States, according to the National Weather Service.

"Lightning is very random in terms of fatalities," National Weather Service lightning safety expert John Jensensius told CNN. "We normally see a good amount of lightning in June, but this is unusually high. There really is no good explanation of why that's the case."

Six of the 15 lightning-strike deaths in the U.S. so far this year occurred in California, Texas and Florida, with the rest scattered through the South, Midwest and West. No deaths have occurred in the Northeast so far, "likely due to the cool, damp pattern we've seen in New England," Jensensius said. "There have been less severe thunderstorms there."

• Stay indoors for 30 minutes after the last thunder clap

• Do not use a corded phone during a thunderstorm unless it's an emergency; cell phones are safe

• Keep away from plumbing, electrical equipment and wiring during a thunderstorm

Summer is the deadliest season for lightning strikes because of the frequency of thunderstorms and the fact that more people are outdoors. This week, the first official week of summer, marks "Lightning Safety Awareness Week" for the National Oceanic and Atmospheric Administration (NOAA).

More than 400 people in the U.S. are hit by lightning each year, according to the National Weather Service. Lightning, on average, kills more people than hurricanes and tornadoes combined (among all weather-related fatalities, only floods kill more). While not all injuries result in death, many victims are left with devastating and permanent disabilities.

You may remember that as a child you were told to count the seconds between a lightning flash and thunder to see how far away the lightning was. But by the time you calculate it, it may be too late. Sometimes thunder and lightning can happen simultaneously.

Despite its "Sunshine State" nickname, Florida receives more cloud-to-ground lightning than any other state in the country, according to data from NASA satellites.

But Florida does not receive the most lightning in the world. According to NASA research, that dubious honor goes to the Democratic Republic of Congo, with 158 strikes per square kilometer each year. Thunderstorms occur in Central Africa year-round.

How powerful is lightning?

According to the National Weather Service, "each spark of lightning can reach over five miles in length, soar to temperatures of approximately 50,000 degrees Fahrenheit and contain 100 million electrical volts."

Can wearing rubber shoes protect you from lightning?

No. That's a myth, and there are lots of them out there. For facts on lightning safety, visit http://www.lightningsafety.noaa.gov/.

All About Weather • National Weather Service