(CNN) -- There is a region of the world where the weather is always hot and humid and it rains almost every day of the year. Sounds predictable, right? But weather in the Intertropical Convergence Zone, or ITCZ, can be volatile and dangerous. 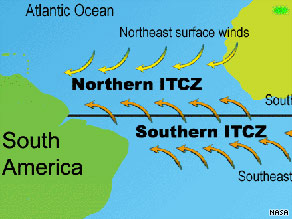 Air France Flight 447 went down in a volatile zone along the equator between South America and Africa.

The Intertropical Convergence Zone, which circles the Earth near the equator, is where officials say Air France Flight 447 plunged into the Atlantic Ocean. While weather has not been cited as a reason for the plane's crash, the tragedy does call attention to the region.

The ITCZ is a belt of low pressure that wraps around the planet. Clouds and storms form along it because it is literally where the winds of the world's hemispheres meet.

High pressure in the Northern Hemisphere churns air from the northeast toward the equator. On the flip side, air is steered from the southeast by high pressure in the Southern Hemisphere. The winds that move this air toward the equator are also known as "trade winds" and converge in the middle of the tropics. That's where the Intertropical Convergence Zone name comes from.

Here, air and water temperatures are typically in the mid-80s. The warm, moist air is heated further by the blazing tropical sun. Steamy air, coming off the ocean, rises until it hits cooler, drier air aloft, forming clouds and thunderstorms. These gigantic storms contain volatile updrafts and downdrafts that can move at speeds of 100 mph.

The height of these storms also can tower to more than 10 miles in the air. Even if you stacked two dozen of the world's tallest skyscrapers on top of each other, they still wouldn't reach the tops of the biggest thunderstorms of the ITCZ.

Former Air Force meteorologist Tim Vasquez wrote about thunderstorms over the Atlantic at the time of the Air France plane's disappearance on his Web site, weathergraphics.com.

"Based on the infrared satellite imagery, I was able to. . .estimate the altitude of the thunderstorms at around 51,000 feet," he told CNN in a phone interview.

Vasquez himself has flown through the ITCZ at least half a dozen times.

"I remember flying from Guam to the Philippines, constantly weaving around the thunderstorms. Sometimes, though, pilots are forced to fly through them," he said.

That's because commercial airliners cannot fly above 50,000 feet. In addition, ITCZ thunderstorms can merge with one another to stretch far and wide, covering hundreds of miles.

How did the plane break into pieces? »

When it's not storming in the ITCZ, the weather can be completely calm, with little to no wind. This stretch of ocean was particularly dreaded by sailors of the 19th century, who named it "The Doldrums," because its lack of wind could leave them stuck at sea, unable to propel forward.

Despite these challenges and dangers, planes and ships successfully cross the ITZC every day, thanks in part to technology that has made it easier to see where the thunderstorms are.

Here are some commonly asked questions:

Can hurricanes form in the ITCZ?

It's extremely rare for a hurricane to form near the equator. However, the ITCZ doesn't stay in one place all year long. In the summer, for example, it drifts more northward, where it's possible for tropical cyclones to develop from the thunderstorms there.

What does the ITCZ have to do with the "monsoon season" in Asia?

Since the position of the ITCZ fluctuates, the location of the heaviest rainfalls varies depending on the time of year. When the zone drifts more northward in May and June, it brings the rainy season to places like Southeast Asia and India. The term "monsoon" refers to a seasonal reversal of winds.